Here is the third creation I have made using "Animal Antics." 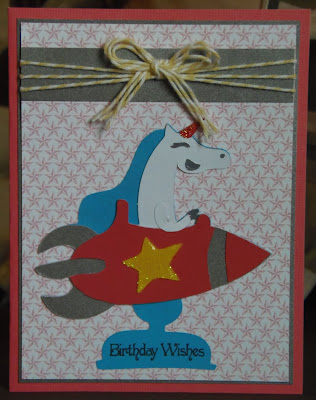 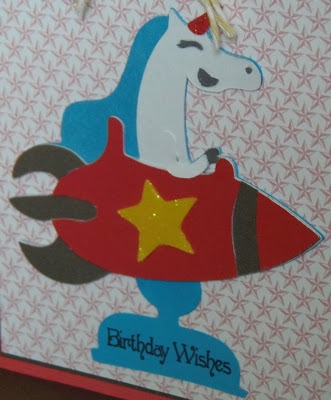 The adorable little unicorn is the cut that came from "Animal Antics."  She is cut at 3 3/4."  I used some blue flocking powder on her hair and added some tropical punch Stickles to her horn.  I also covered the star in yellow glitter, then covered the glitter with glossy accents.  I like the glittery, shimmery look that technique produces.  The sentiment is from Scrappy Moms Stamps, their "Mini Messages" stamp set.
I used the current color challenge at Color Throwdown for the colors of this card.﻿
Posted by Paula Bee at 9:37 AM 3 comments:

There are so many cute little critters on this cartridge.  It is really hard to decide which one to use next!
I have been wanting to use a certain sentiment from Scrappy Moms Stamps for a while, but never got around to it.  I decided that I would use it on this card and that pretty much decided which image I was going to use this time around.
So, here is the card I made: 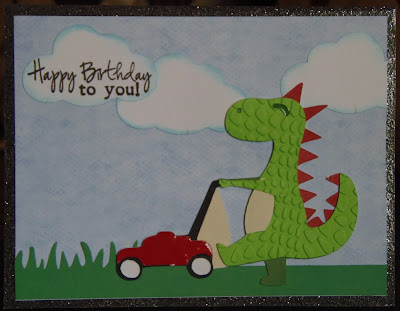 The card base is a pre-made one from DCWV.  I have a bunch of pre-made card bases, so I think I will be using them quite a bit, trying to use them up.  The card is 5 1/2"x4 1/4."  I cut a piece of blue patterned paper, from K&Company, at 5 1/4"x4."  I used a Fiskars cloud punch for my clouds.  They were inked with some broken china Distress Ink by Ranger.  I cut a strip of green cardstock and punched the edge of it with a Fiskars grass edge punch.  I then trimmed off the grass on half it and adhered it down to the card. 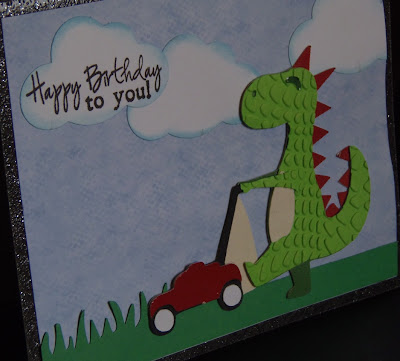 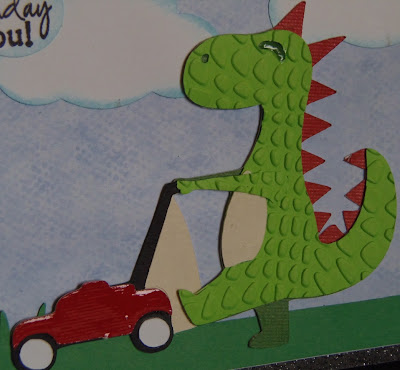 The little dinosaur is the image that I chose to go with from "Animal Antics."  I cut it at 3."  I embossed the light green layer with a Cuttlebug embossing folder called "Animal Print."  I also added some glossy accents to the mower and his eye.  The sentiment is from Scrappy Moms Stamps, the "Hooray for Birthdays" set. 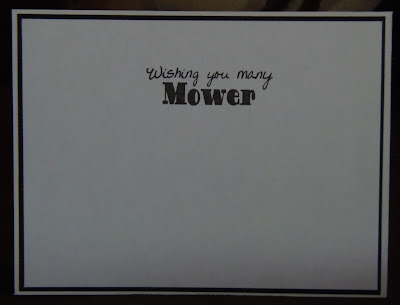 For the inside of the card I cut some black cardstock at 5 3/8"x4 1/8."  I then cut some white cardstock at 5 1/4"x4."  Here is where I used the sentiment that inspired the rest of the card: "wishing you many mower."  This is also from Scrappy Moms Stamps, this time from the "Quirky Quotes" set.  I thought it was so much fun and this little mowing dino was perfect for it!﻿
Posted by Paula Bee at 10:00 AM 2 comments:

I wanted to start exploring my Cricut cartridges a little more and since I used "Animal Antics" for my last design team project with The Perfect Sentiment, I thought it would be the perfect cartridge with which to start.
Here is the first project I created with "Animal Antics." 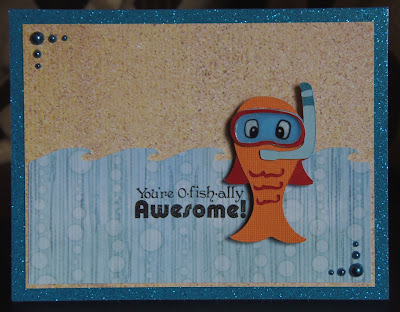 The card is 5 1/2"x4 1/4."  I used a pre-made card base from DCWV.  I cut some sand patterned cardstock at 5 1/8"x3 7/8."  The sand cardstock came from The Tahiti Beach Stack by DCWV.  I used "Wild Card 2" and Cricut Craft Room to cut the waves.  I turned off the aspect ratio and sized the waves at 5"x2."  The paper I used for the waves came from a stack by Debbie Mumm, called Travel.  I then added some dark blue pearls to the corners. 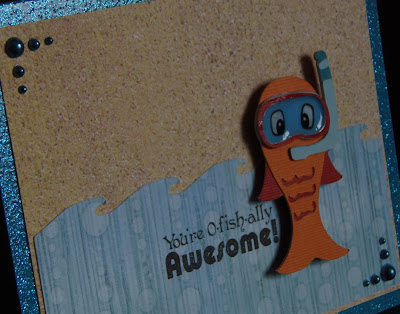 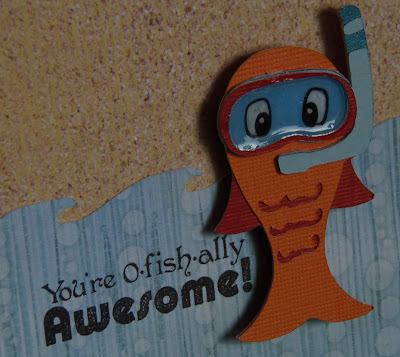 The fish is from "Animal Antics."  It was cut at 2 1/2."  I used some eyes from the Peachy Keen stamp of the month October 2012 kit.  I used a white gel pen to color them in, then covered the eye mask with diamond glaze for a shiny look.  I adhered the fish to the card with foam tape.  The sentiment is from Scrappy Moms Stamps, the Little Critters set. 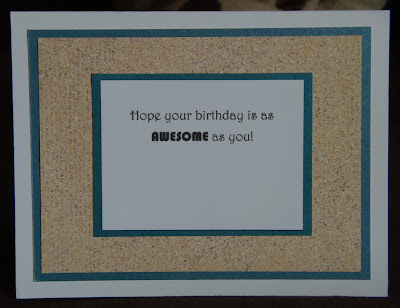 It is Wednesday and that means it is challenge time at The Perfect Sentiment!
This week our challenge is to "Make Them Laugh!"
The challenge is to create a card with a humorous sentiment on the front.
Here is what I made: 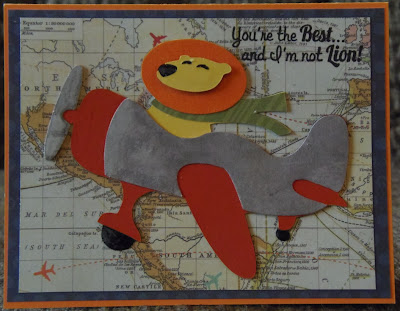 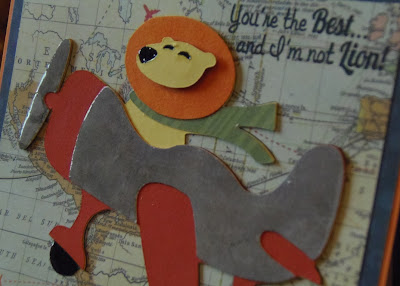 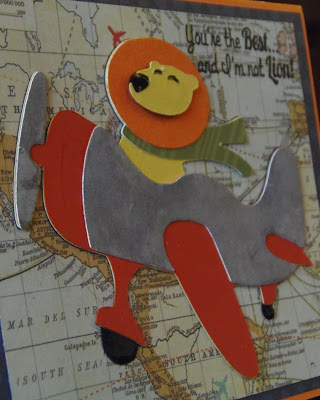 Supplies used:
Cardstock: orange, red, yellow - The Paper Company; patterned cardstock - Simple Stories "Urban Travel"
Cricut Cartridge: Animal Antics
Stamp: Scrappy Moms Stamps
Ink: onyx black - Versafine
Other: foam tape - Scotch; glossy accents - Ranger
Now be sure to head on over to The Perfect Sentiment and take a look at what the rest of the design team has created for your inspiration.  Then be sure to link up your humorous creation.  I can't wait to see what you create!
﻿
Posted by Paula Bee at 11:00 PM 3 comments:

This week our challenge at The Perfect Sentiment is really easy!
It is an "Anything Goes" challenge, which means that you can create any paper-crafted project for this challenge.  The only requirement is that there be a sentiment on th front of the project.
Here is what I created: 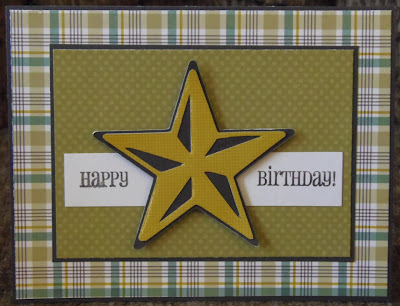 Time for another challenge at The Perfect Sentiment.
The challenge this week is to create a thank you card with a spring theme.  This means using spring themed images, embellishements, die cuts, or embossing.  Just be sure to include your sentiment on the front of your card.
Here is the card I created for this challenge: 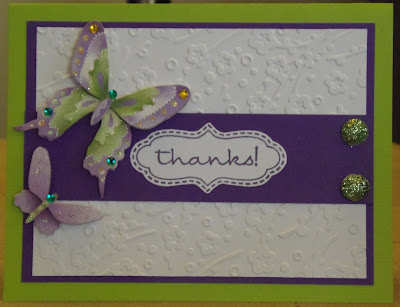 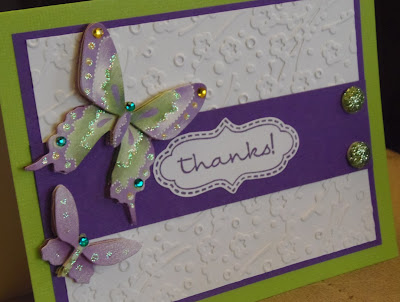 Supplies used:
Card base: DCWV
Cardstock: The Paper Company
Embossing Folder: Plum Blossoms by ProvoCraft
Embellishments: Butterflies - K&Company, Glitter Gems - Recollections
Stamp: Fiskars
Ink: Dusty Concord by Ranger
Check out the rest of the DT's creations at The Perfect Sentiment and then link up your own spring themed thank you card.  I can't wait to see what you create!﻿
Posted by Paula Bee at 11:00 PM 3 comments:

Here is The Perfect Sentiment challenge for you this week:
"Dry Embossing"
Create a card for the occasion of your choice and include some dry embossing.  Don't forget to include your sentiment on the front of the card.
Our sponsor for this week is The Paper Shelter and the winner will receive a $20 gift voucher.

Here is the card I created for this challenge: 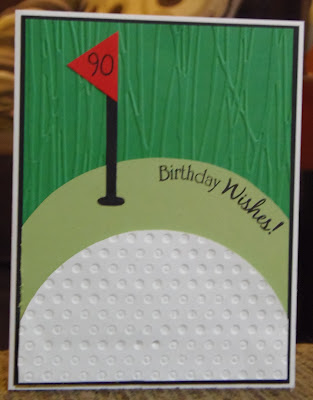 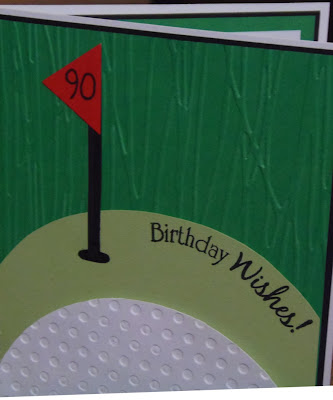 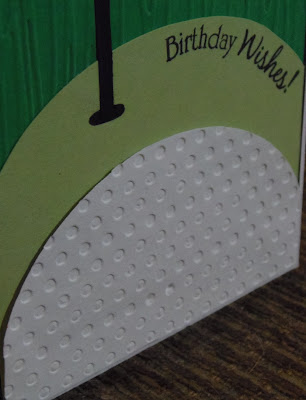 This card was for my grandfather's 90th birthday, which was in April.  He is still an avid golfer, so I had to make something for him honoring that aspect of his life.
Now, head on over to The Perfect Sentiment and link up your card using dry embossing.  I can't wait to see what you create!
﻿
Posted by Paula Bee at 11:00 PM 4 comments: