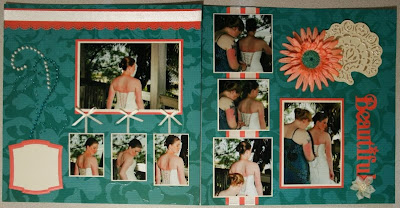 Here is another part of the wedding scrapbook for my friends. If you missed some of the other ones, my friends got married in Belize in June, and as part of their gift I am making their scrapbook. The other part of their gift was my going to Belize with them. :) I know, it was such a sacrifice on my part! ;) My friend's dress had this crazy lace-up back that I got the joy of doing. So, these are the pictures of that adventure. It seemed like it took forever because I had to make sure that each time I pulled it through I had to make sure the lace was laying flat. So, in the pictures I am the one doing the tying, with my insane sunburn. I think the pictures actually toned it done, if you can believe that! 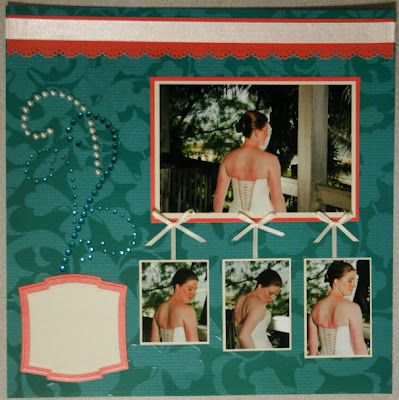 Both pages are 12"x12" and the background paper is from the Mediterranean Stack by DCWV. I cut a strip of coral cardstock at 1 3/4"x12" and used a Martha Stewart border punch on the bottom edge of it. I adhered it down, then added some ivory ribbon. The large picture on this first page is 4"x6." I double matted it with ivory and coral cardstocks, both are from the Mediterranean Stack by DCWV and both are 1/4" larger than the previous layer. The three smaller pictures are all 2" wide, but they vary in length. The smallest one is 2 1/2," the middle one is 2 3/4" and the third one is 3" tall. I single matted these ones in ivory and "hung" them from the larger picture. I used small ribbon under the pictures, then tied that same type of ribbon into bows that I attached at the bottom of the larger picture. I am really lovin' how they look!! I created the swirls with some teal gems and white pearls. The journaling space is cut from the Nestabilities Label Two die. 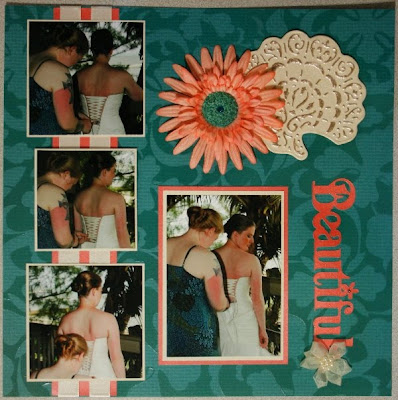 I also cut a strip of coral cardstock for this page as well. This time the strip is 2"x12" and I just adhered it down, vertically, and added two strips of ivory ribbon. I put three pictures along the ribbon, the top and bottom ones are 3 1/2"x3 1/2" and the middle one is 3"x3." I single matted all three of them with ivory cardstock. The larger pictuers is 3 1/2"x5." I double matted this one with ivory and coral cardstocks, both layers 1/4" larger than the previous layer. My title was cut from Tinkerbell and Friends at 3/4." I then added a organza flower that I picked up at JoAnns and covered it with glossy accents. The large coral colored flower is actually a white daisy clip that I got at JoAnns. I then took off the clip and took the pieces apart and sprayed it with coral reef Tattered Angels Glimmer Mist. I also sprayed the center part with bahama blue. Once it was dry I put it back together again, minus a couple of layers (it would have been too big) and added a little bit of lagoon Stickles to the center. The seashell is a chipboard piece from Tattered Angels. I painted on some Perfect Pearls, by Ranger. I then added some liquid pearls to the embossed accents on the shell. 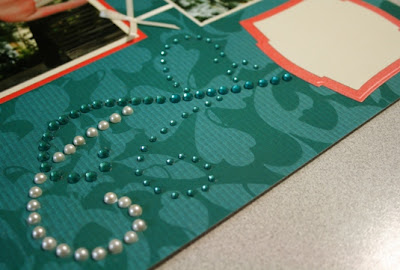 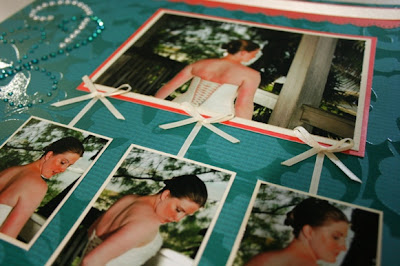 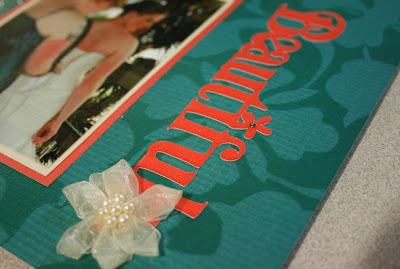 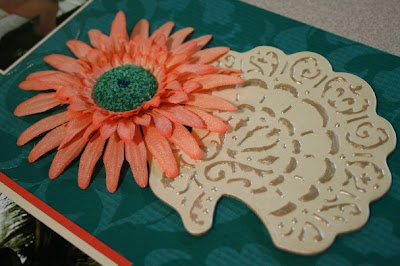 There was so much that I did on this layout, but I think it was totally worth it. I just love how it all turned out, especially the look of those little bows! Enjoy!!
Posted by Paula Bee at 8:32 PM

Email ThisBlogThis!Share to TwitterShare to FacebookShare to Pinterest
Labels: Spellbinders, Tinkerbell and Friends