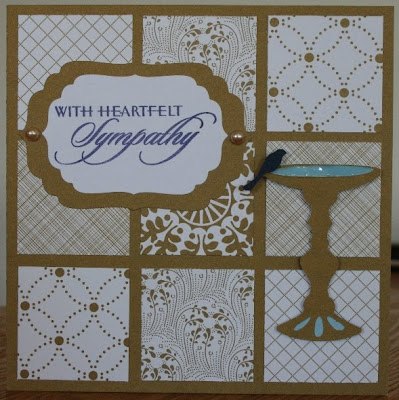 Here is a nice and simple sympathy card I made for a couple of challenges today. It is 6"x6" and all the smaller squares are 1 3/4"x1 3/4." I used the birdbath cut from French Manor and cut it at 3." The sentiment is a stamp I had in my stash and I framed it using a Nestabilities die. I used some pop-dots to adhere the birdbath to the card and also the bird to the birdbath. I also added glossy accents to the water in the birdbath, which I think gives it a great effect. Supplies used:
I made this for the following challenges:
Posted by Paula Bee at 11:23 AM