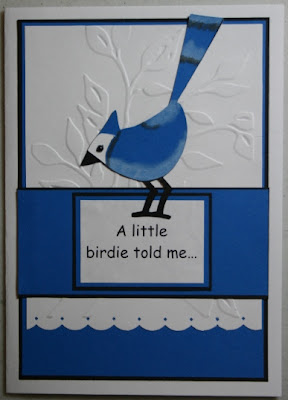 My mom requested that I make a card for her to give to a friend of hers. They give each other blue jay stuff, so she wanted a card with a blue bird on it. I have a card I made a while back with a red bird on it, it looks like a cardinal. She wanted something similar to that card, so I basically copied it...guessing on the sizes though since I don't know them anymore. You can see the original card here.

The card is 5"x7" and made of white cardstock. I cut some black cardstock 4 1/2"x6 1/2" then cut some blue cardstock 1/8" smaller. I cut some white cardstock at 4 1/4"x5 3/4," then used a Fiskars border punch on the bottom of it and ran it through my Cuttlebug with the Leafy Branch folder. I cut the bird from Winter Woodland at 3 1/2." I then added some white and black ink to make it look more like a blue jay than just a blue cardinal. I also gave him a black pearl for his eye. I cut a strip of black cardstock and a strip of blue cardstock and adhered it over the middle of the card. I used the computer to create the front sentiment, then matted it with blue and black. 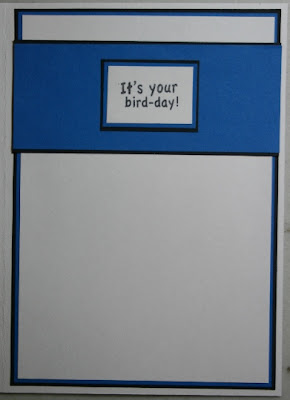 For the inside of the card I cut some black cardstock at 4 3/4"x6 3/4." I then cut some blue cardstock 1/8" smaller than the black and some white cardstock 1/8" smaller than the blue. I also cut a strip of black and a strip of blue cardstock and adhered it near the top of the card. I used a stamp from My Pink Stamper for the sentiment on the inside, then matted it with some blue and black cardstock. I think it will be just what she is looking for.
Posted by Paula Bee at 7:13 PM