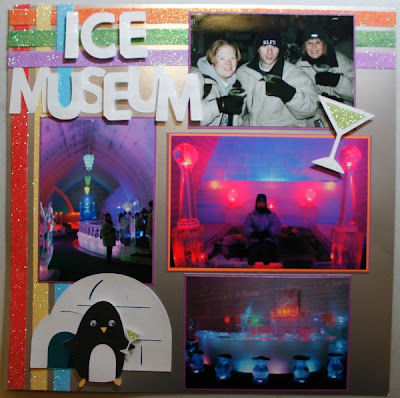 This is a 12"x12" layout that I created for the scrapbook I am making for my mother. She came to visit us when we were living in Alaska, so I wanted to make her a scrapbook to remember her visit. It will be slow going, as I have all kinds of projects in the works, but I will get it done eventually. I promise, Mom! 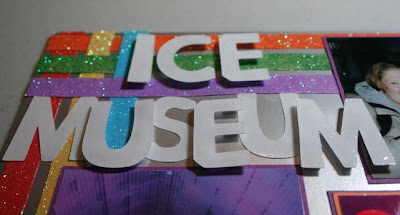 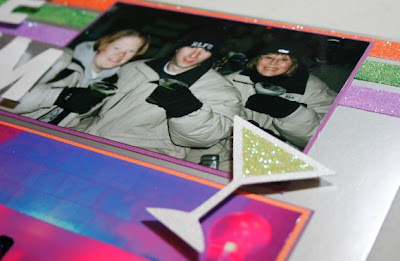 I used a silver cardstock for the base of the layout. I then cut six 1/2" strips of white cardstock. I then ran them through my Xyron and sprinkled each one with glitter. I adhered them to the page, three going vertical and three going horizontal. My largest picture, which is the one in the middle, is 4"x6," and double matted with orange and purple cardstock. My other three are 3 1/2"x5" and single matted with purple cardstock. All the mats are 1/8" larger than the picture (and the previous layer in the case of the largest picture). The title is cut from Cricut Keystone at 1 1/2." I covered it all with glossy accents and use pop-dots to adhere part of it down. The igloo is from Create a Critter, cut at 3." The penguin is from Winter Frolic, cut at 2 3/4." I used Cuttin' Up to cut the martini glasses. The one the penguin is holding is cut at 1/2" and the larger one is 2 1/2." I covered the igloo with glossy accents as well. I used pop-dots to adhere the penguin and the martini glass. I also gave the penguin google eyes. 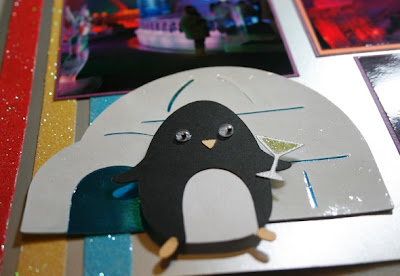