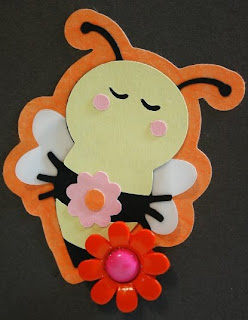 This is a 3 3/4"x9" card, made from a dark brown cardstock. I left the background plain so the other elements would pop more. All the cuts came from the Paisley cartridge. The bee was cut at 2 1/2" and I used the shadow feature on it as well. I cut the wings twice, once with shimmery white cardstock and once with vellum. Once it was assembled, I then folded up the vellum layer of wings, for some dimension and to make it seem like he was flying. The flowers on this card were made using the button feature on this cartridge. I cut them both at 2" and then embossed the flowers with the D'vine Swirls folder and the flower centers with the Swiss Dots folder. Once all the cuts were adhered to the card base I finished it off with some buttons, two butterfly ones and a flower one.