My cousin's daughter is turning 1 this month and his wife emailed me a little while ago asking if I would make the invites and some of the party decor. I agreed and this is everything I made for it. 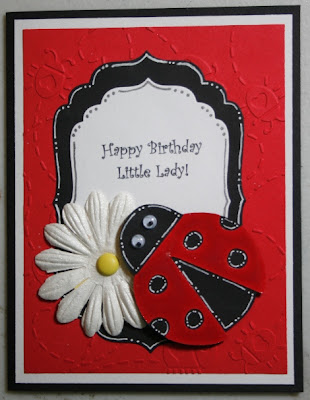 This 4 1/4"x5 1/2" card is what I made for her actual birthday card. I embossed the red layer with one of the Simply Charmed companion folders. The sentiment is computer generated. I used one of my Nesties to create the label. I sprayed a Prima flower with shimmer mist and used a yellow brad as the center. The ladybug is from Doodlecharms, cut at 2." I then doodled around the labels and the ladybug, gave it some google eyes and added glossy accents to the back of the ladybug. 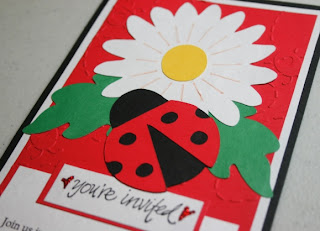 This is the invite that I made for the party. I had created a variety and this is the one she liked the best. It is 9"x4." I embossed the red layer with the Simply Charmed companion folder. I used my computer to create the party info. The daisy is from Picturesque, cut at 3;" the leaves are from Mother's Day Boquet, cut at 2;" and the ladybug is from Doodlecharms, cut at 1 3/4." I stamped the "you're invited" and added some red Stickles to the hearts on either side of it. 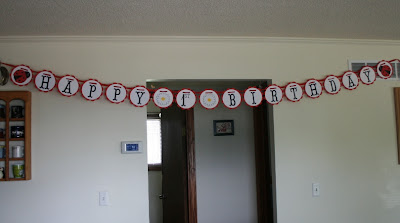 The banner was cut using Birthday Bash for the scalloped and regular circles. They are cut at 6." The font is from Storybook, cut at 4 1/4." The ladybugs are from Doodlecharms, cut at 4 1/2." I added google eyes and some doodling. The daisy is cut from Picturesque at 4 1/4." I embossed the center of the daisy with Swiss Dots. 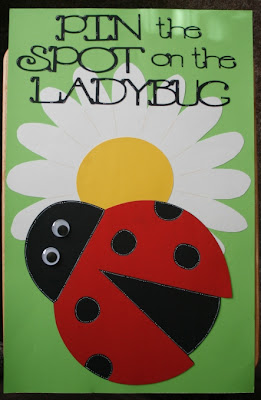 She also requested a "Pin the Spot on the Ladybug" game. I used some green posterboard for the base of the game. I then cut a daisy from Picturesque as large as I could. I placed it on some white posterboard, then used it to draw out an even larger daisy. I cut the ladybug from Doodlecharms at 10 3/4" (as large as it would go), and used my Gypsy to hide one of its spots. I gave it large google eyes and doodled on it to match the banner. The font is Tear Drop and I used my Gypsy to weld all the letters of the words together. I then added a little bit of doodling to the letters. 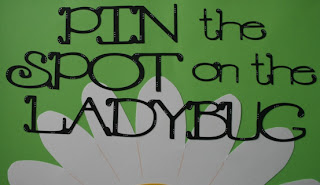 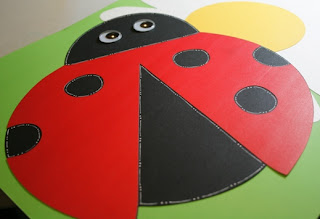 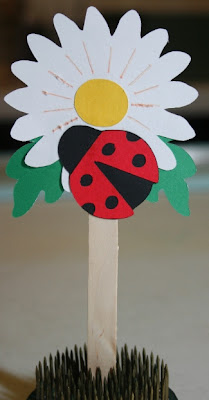 The final thing I made for the party was some cupcake toppers. I cut the daisy from Picturesque at 2 1/2," the ladybug from Doodlecharms at 1 1/4" and the leaves from Mother's Day Boquet at 1 1/2." I attached all of that to a popsicle stick so they can put them in the cupcakes.

I also made this for the following challenges: