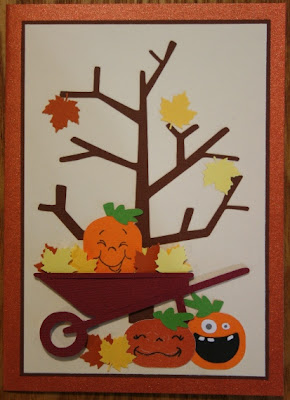 This fun fall card is 4 1/2"x6 1/4." I used a wonderful shimmery orange cardstock for the card base. I then cut some brown cardstock 1/2" smaller and some ivory cardstock 1/8" smaller than the brown. I cut the tree and all three pumpkins from Mini Monsters. The wheelbarrow is from Walk In My Garden. I gave two of the pumpkins Peachy Keen faces, the other one is how it comes on Mini Monsters (I just love that face). The leaves are punched. I pop-dotted the wheelbarrow, then layered in some leaves and the pumpkin. I then pop-dotted in the last layer of leaves. The other two pumpkins are on the ground with some leaves and I finished off the front by adding just a few leaves to the tree. 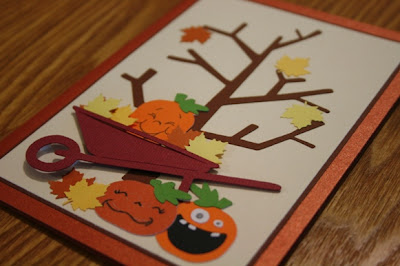 For the inside of the card I cut some brown cardstock 1/8" smaller than the card base, then some ivory cardstock 1/8" smaller than the brown cardstock. The "have a" part of the sentiment is stamped. I then drew over it with a shimmery orange pen. I used Straight From the Nest for the "fabulous fall" part of the sentiment. I finished it all off by covering the fall part in paprika Stickles. 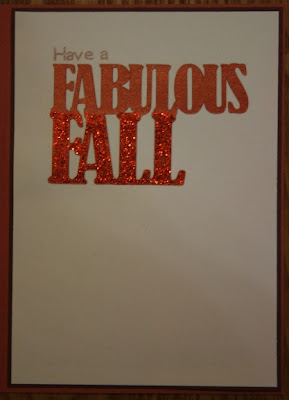 Email ThisBlogThis!Share to TwitterShare to FacebookShare to Pinterest
Labels: Mini Monsters, Straight From the Nest, Walk in My Garden