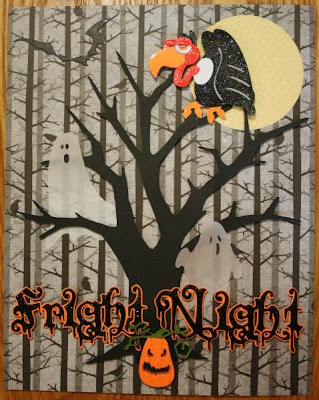 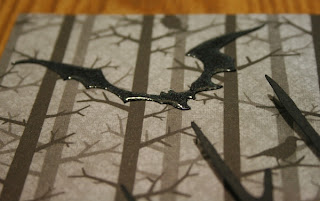 This is some Halloween wall decor. It is 8"x10." The background cardstock is from DCWV, the Midnight Spell Stack. The tree is cut from Paper Doll Dress Up. I cut it large enough to fit the page, I don't remember what size that was though. The vulture is cut from Life's a Party at 2 1/2." I used crackle accents on the head and feet, glossy accents on the beak, black diamond Stickles on the body and white flocking on the ring around the neck. The moon was cut using George and Basic Shapes. I was inspired by the moon I saw this morning on my way to work (yeah, I work early enough that it was still dark and the moon was out). It took me a while to find the right combination of colors and paper. I used an ivory cardstock and a yellow-tinted vellum, which I embossed using the Tiny Bubbles embossing folder. The bat was cut from October 31st at 2 1/4." I covered it with glossy accents. The ghosts were cut from silver-tinted vellum at 2 1/2" (the ghost on the right) and 3" (the ghost on the left), both are from Happy Hauntings. The pumpkin is also from Happy Hauntings, cut at 1 1/4." I used the Distress Stripes embossing folder for the orange cardstock. I am loving this folder for pumpkins...it was like it was made for it! I used Happy Hauntings and my Gypsy to cut "Fright Night." It is cut at 1.15" using both the shadow and regular vampire font features. I adhered the moon and bat to the background cardstock. The tree was pop-dotted with thinner pop-dots, as was the title. Everything else was adhered with thicker pop-dots, except the ghosts. I adhered the lower part of them to the background cardstock, then curled them up slightly for some dimension. I am putting this in a shadow box to hang on my wall for Halloween. 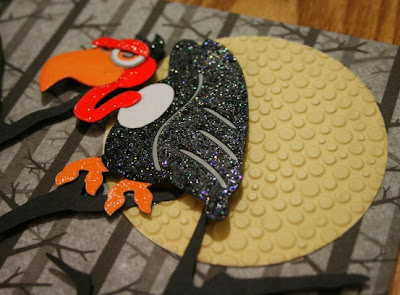 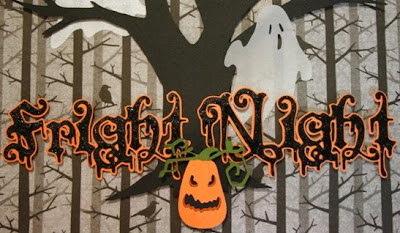 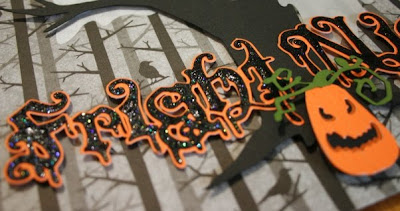 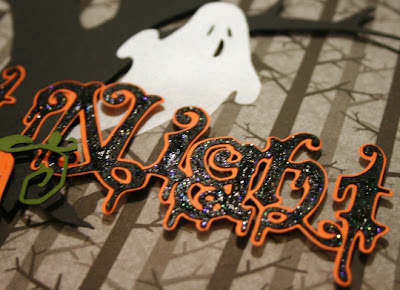 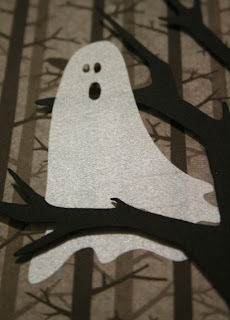