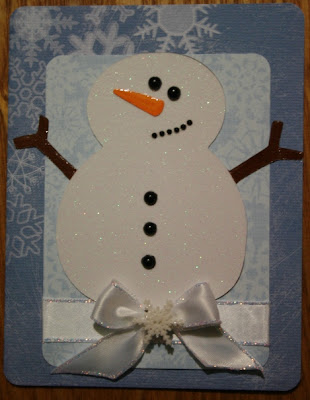 This is a 5 1/2"x4 1/4" card. I used a pre-made card from DCWV for the card base. I cut some snowflake patterned cardstock, also from DCWV (their Peppermint Forest Stack), 1" smaller. I used a corner punch on the card base and the smaller piece. I wrapped the bottom of the snowy rectangle with some white ribbon, then tied a bow with another piece and adhered it to the ribbon. I adhered the rectangle to the card base. The snowman is cut from Doodlecharms, using some glittery white cardstock. He is adhered to the card. I added crackle accents to his arms and glossy accents to his nose. To make his eyes, smile and buttons look like coal I used some black pearls. To finish off the front of the card I added some diamond Stickles to the ribbon and bow and put a snowflake button on the middle of the bow. For the inside of the card I cut some of the same snowflake patterned cardstock 1/8" smaller than the card base, then some white cardstock 1/2" smaller than the snowflake piece. I used a corner rounder on those pieces as well and adhered them to the card base. I then stamped my sentiment in some blue ink by ColorBox. The sentiment stamp is from Scrappy Moms Stamps. 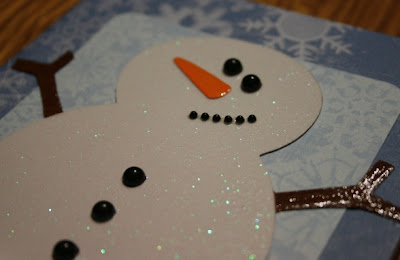 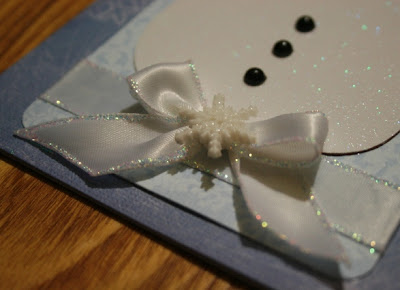 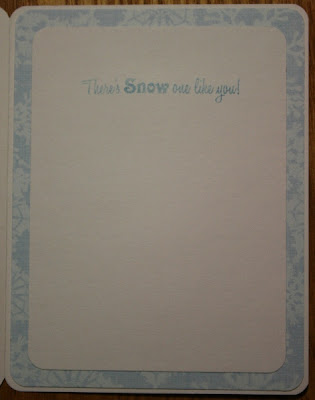 Email ThisBlogThis!Share to TwitterShare to FacebookShare to Pinterest
Labels: Doodlecharms