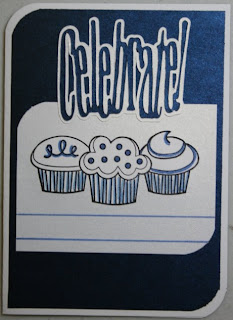 This is a super simple card, but I really like how it turned out. It is 4 1/2"x6 1/4." I used white cardstock for the card base and rounded two of the corners with a corner rounder from EK Success. I then cut some shimmery dark blue cardstock at 4 1/4"x6," rounded two of the corners and layered it on the card base. I stamped the image, which is from TPC Studios, onto white cardstock. I colored only part of it in, using a light blue on the cupcake wrappers and a glittery blue for parts of the icing. I cut out the image, it actually had a candle in the middle cupcake, but I cut it off. I then cut a piece of shimmery white cardstock at 3"x4" and rounded two of its corners as well. I then adhered that to the card base and the cupcakes to the white rectangle. I drew in two blue lines using the same blue marker that I used to color in the cupcake wrappers. I used Stamped to cut the senitment at 2." I cut it in shimmery white carstock using the shadow feature and in the shimmery dark blue cardstock regularly. I then adhered the sentiment to the card so that it overlapped the white rectangle. Nice and easy! Enjoy!! 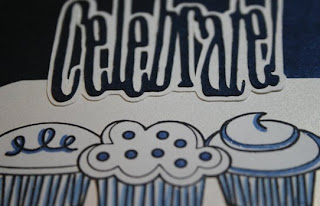 Email ThisBlogThis!Share to TwitterShare to FacebookShare to Pinterest
Labels: Stamped