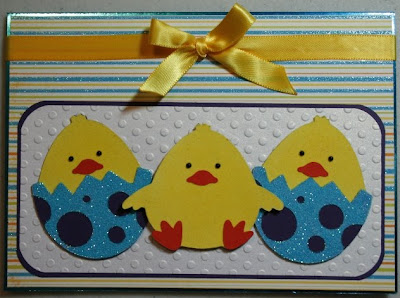 Here is a fun Easter card for you all! This one is 4 1/2"x6 1/4." I used a blue metallic cardstock for the card base, then cut some striped cardstock 1/8" smaller and adhered it to the card base. I cut some dark purple cardstock at 5 7/8"x2 3/4" and some shimmery white cardstock at 5 3/4"x2 5/8." I embossed the white cardstock with the Polka Dots folder. All the chicks are cut from Simply Charmed at 2 1/4." I flocked each chick with yellow flocking powder and used some Blueberry Slush glitter from Martha Stewart. I added some black pearls for their eyes and finished it off by tying a yellow ribbon around the card. 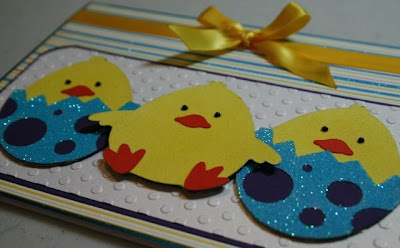 For the inside of the card I cut some light blue glitter cardstock at 6 1/8"x4 3/8" and some purple cardstock at 6"x4 1/4." I then cut some white cardstock 5 3/4"x4." I then used a stamp from Inkadinkado for the sentiment. I used embossing ink and some purple embossing powder. I heat set it and over heated part of it to give it a varigated look. I then used Simply Charmed again to cut out just the cracked egg, cut at 1 1/2." 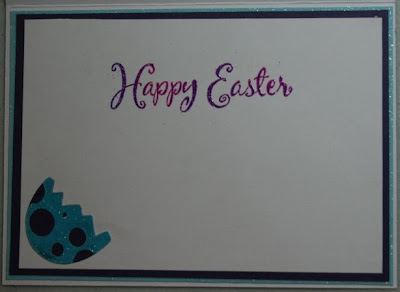 I made this for the Jitterbuggin' "Spring Fling" contest. The rules are to follow the sketch, make an Easter card and use your Cricut. There will be voting to see who is the winner of this contest, so please vote for my card if you like it. Voting runs from April 16-April 19. :) I also made this card for the Paper Cutz Challenge, which is to make an Easter card. Finally, I used the cupcake photo at Cupcake Inspirations as a color inspiration, for some of the colors, and because I really liked the little chick on the cupcake in the lower left corner. Enjoy!!