I had a rare Monday off today, although that was simply because I was working last night until midnight.  So, I decided to be a little craft today, when I eventually got up, and I thought I would make a St. Patrick's Day project. 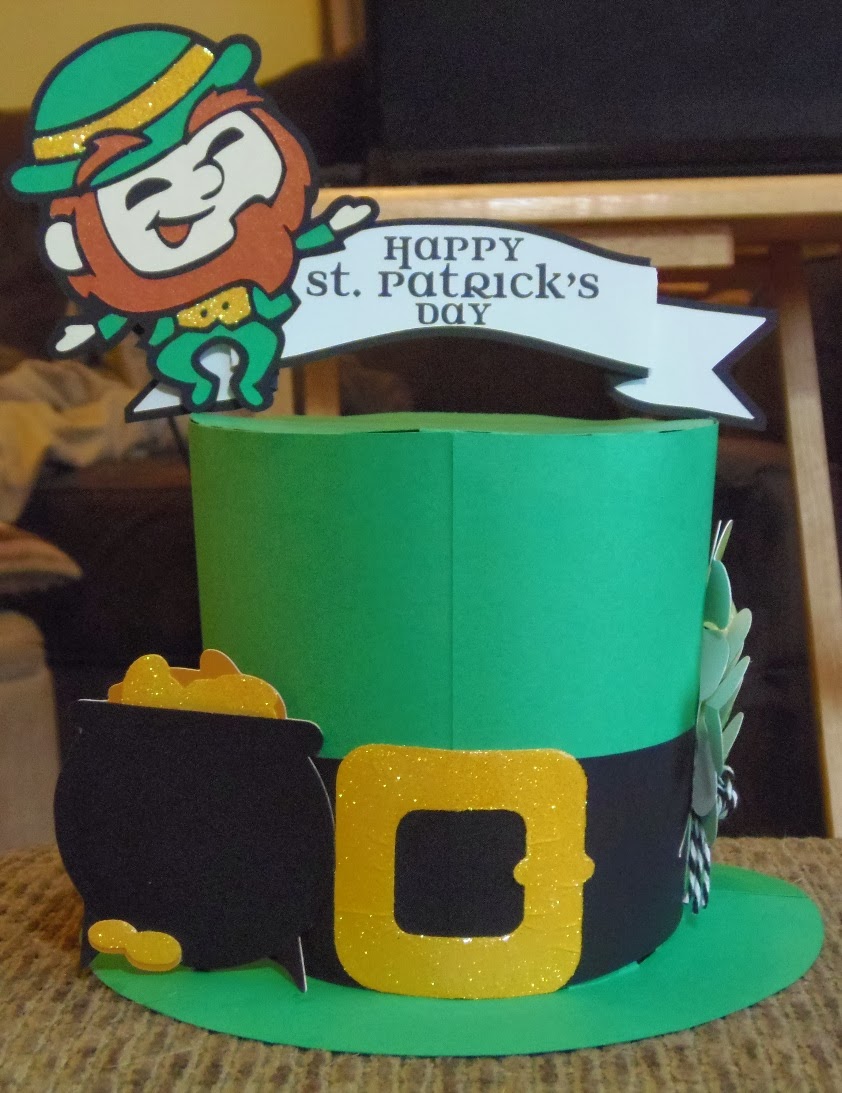 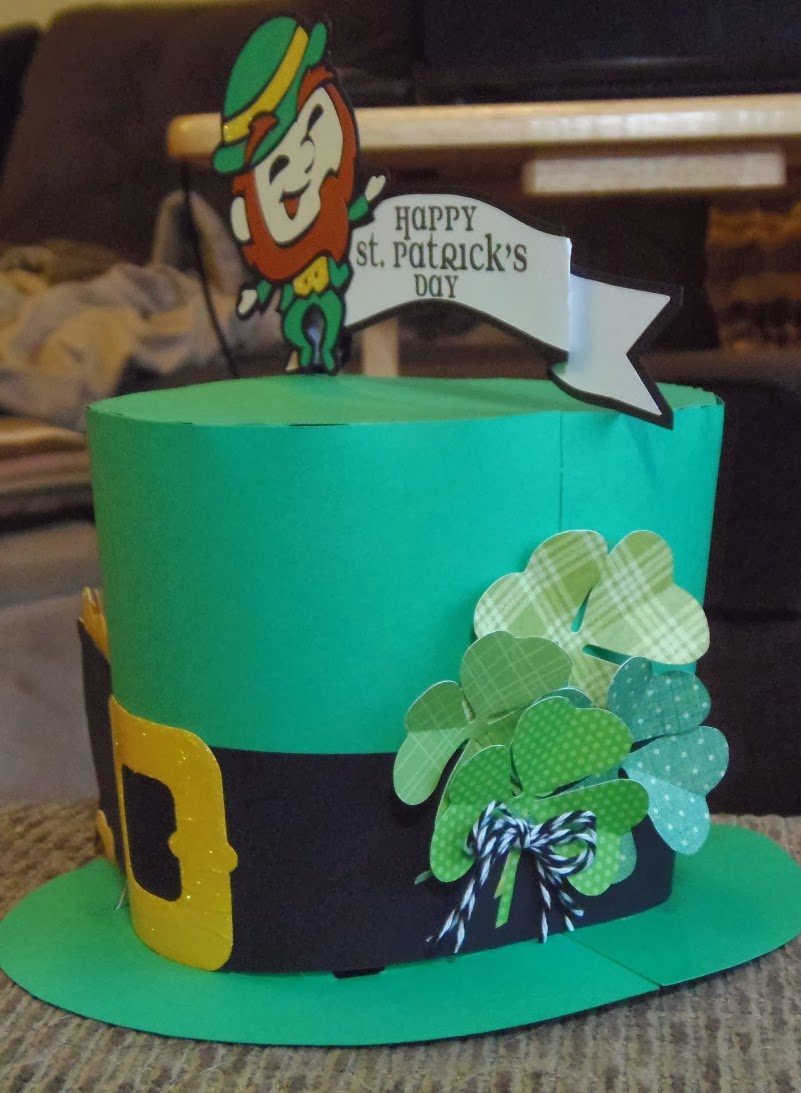 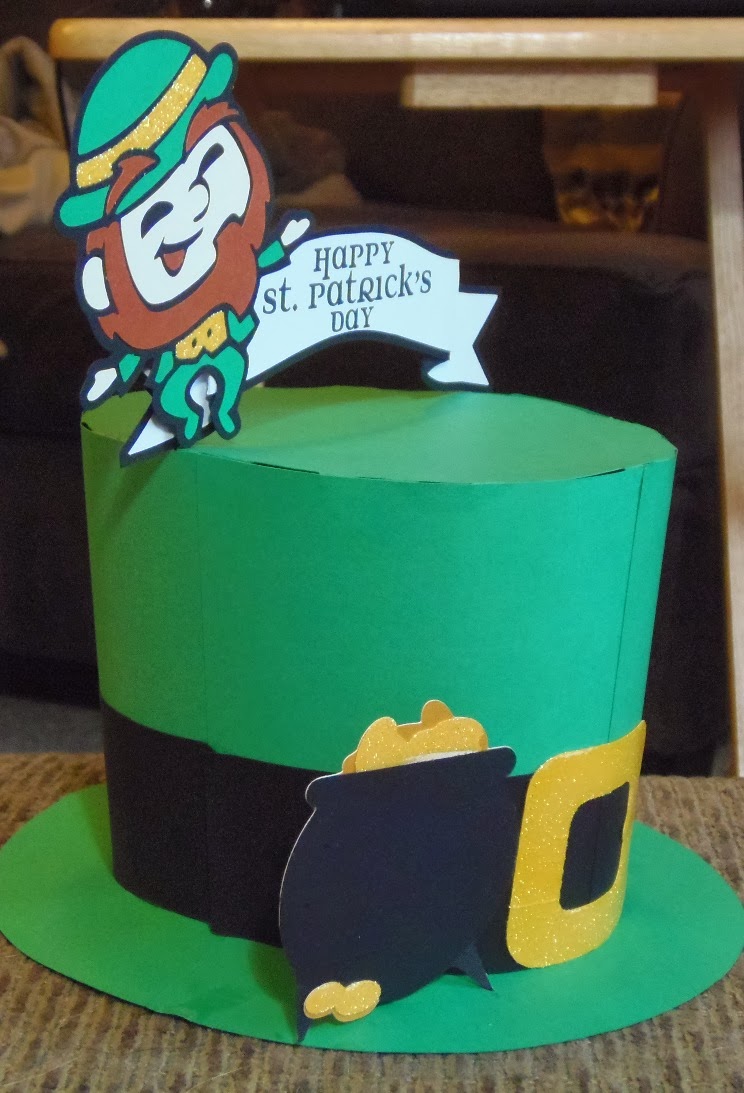 The hat was created using the digital cartridge "Independence Day 3D Projects."  It was cut at 5," which means that it is 5" tall when all assembled.  I cut all the layers of the hat in green and all the layers of the band in black.  I then used "Autumn Celebrations" for the hat buckle.  It is on page 49 of the handbook, the layer 1 (shift) feature.  It was cut at 2 1/4" and covered with yellow glitter, then glossy accents. 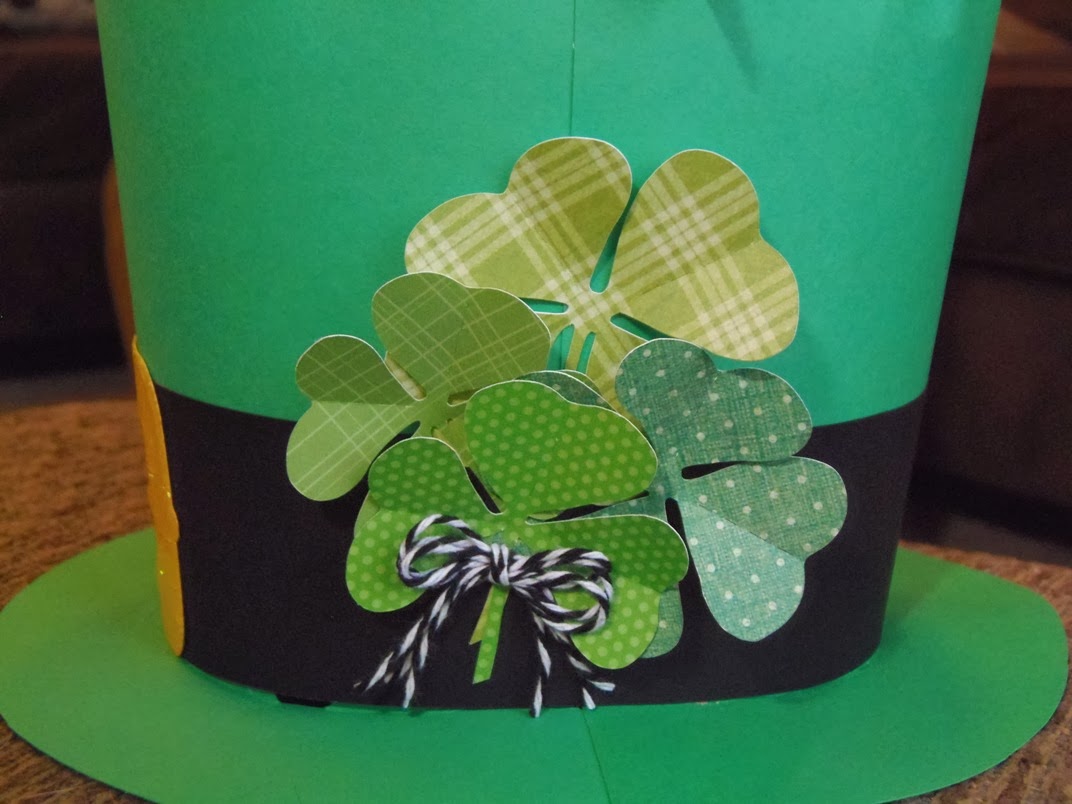 The clover is from the Silhouette Store.  It is called "3D Bunch of Clover" and is by Jamie Cripps (#55883).  I cut it at about 3 1/2" from four different pieces of patterned paper.  I adhered them to the right side of the hat at the hatband and then tied some black baker's twine in a bow and adhered it over the stems of the clover. 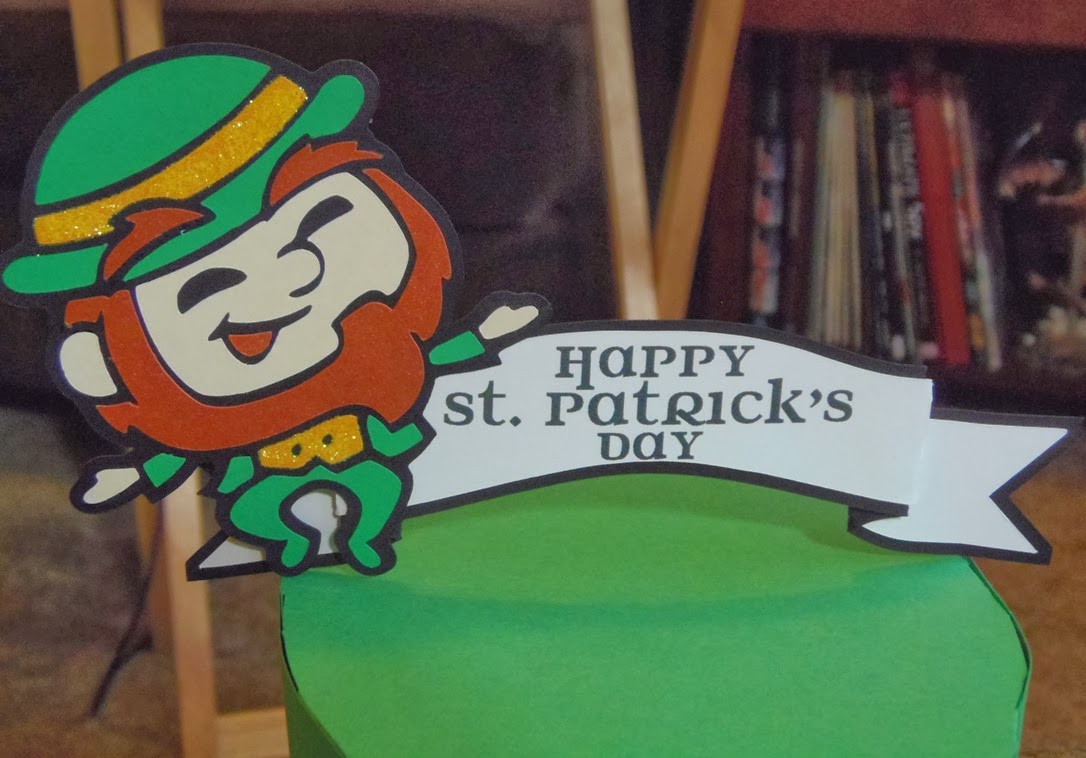 The banner was also created with the Silhouette.  The banner itself is called "3D Banner Curved Top," and is also by Jamie Cripps (#53913).  I used a font from my computer to create the "Happy St. Patrick's Day" sentiment.  I printed it out, then cut it out with the Silhouette Cameo.  I adhered the banner to the top of the hat with some floral wire so that it would stand upright.

The leprechaun is from the digital cartridge "St. Patrick's Day."  I cut him at 4."  I covered the hatband and his waistcoat with yellow glitter and adhered him to the banner. 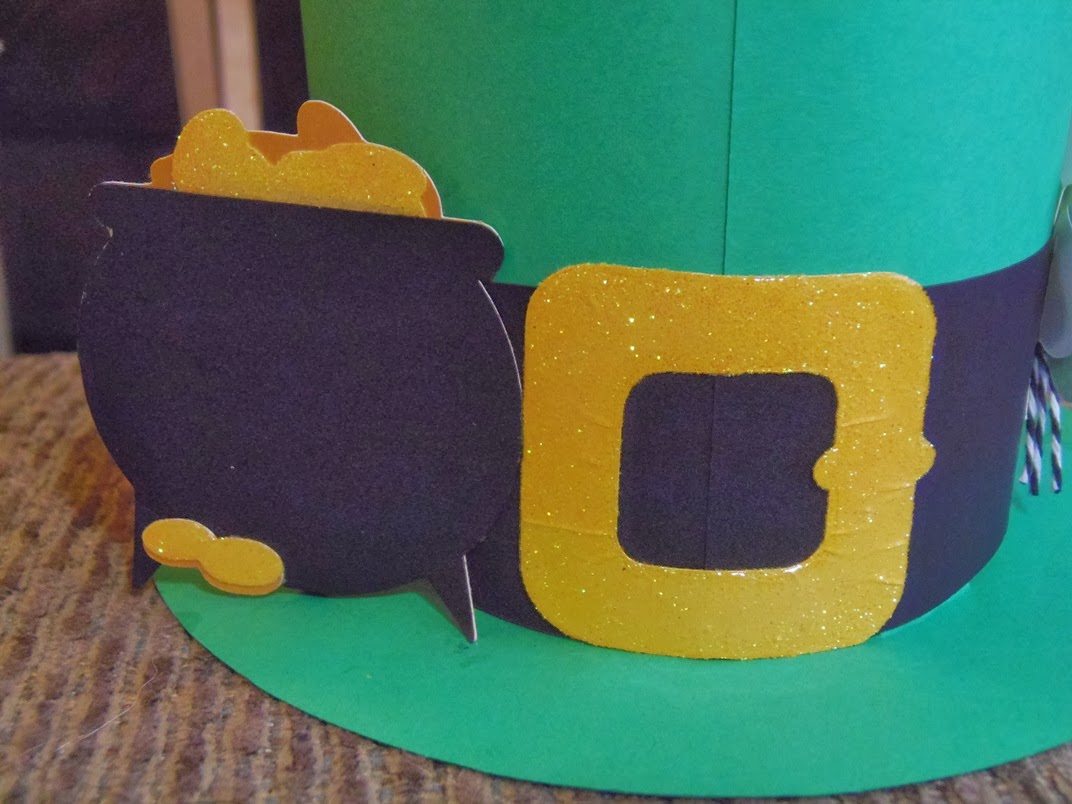 The pot of gold is from "Simply Charmed."  It is on page 33 and was cut at 3 1/4."  I covered the lighter parts of the gold with yellow glitter, then glossy accents. 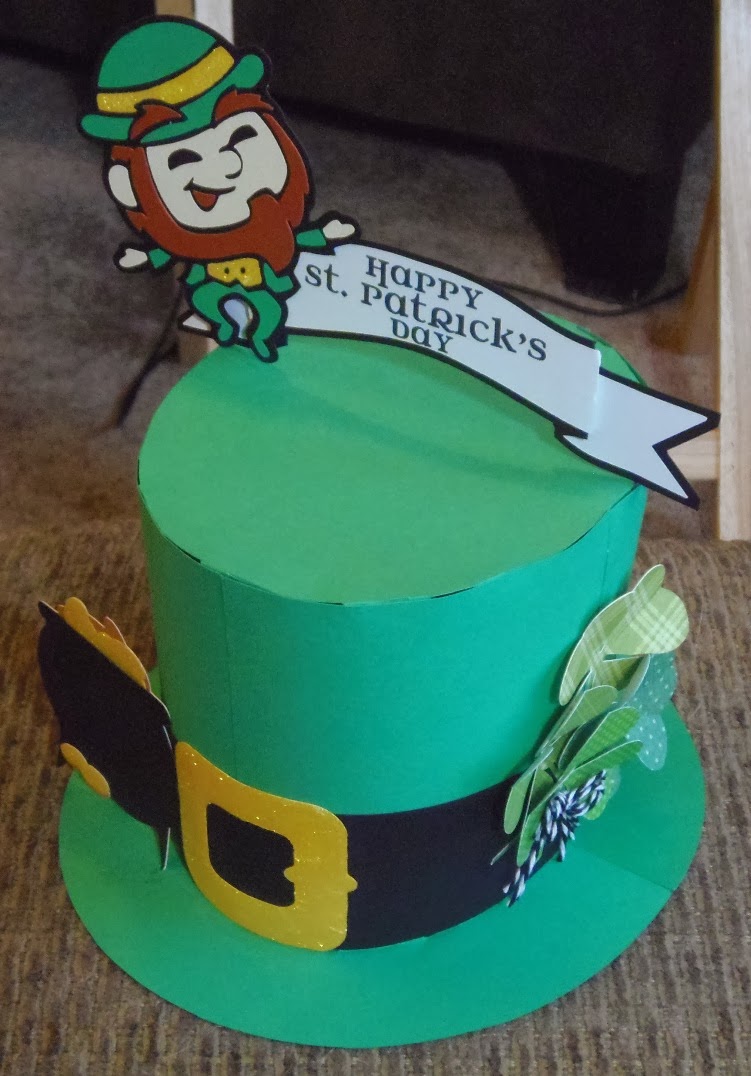