My cousin and his wife loved all the stuff I made for their daughter's birthday. In fact, I got an email a few days later asking if I would make some more stuff for the party. I agreed and wound up making some matching thank you cards, table centerpieces, some large ladybugs for party bags and a few directional signs so guests know where to go.

This is the centerpiece. It will also be where people can place the cupcake toppers if they don't want to keep them. I used quart sized mason jars and put a piece of foam in them. I then stuffed the jar with some green basket grass. I punched a grass border from some green paper, which I then wrapped around the jar. I wrapped all of that with some red and black spotted ribbon. I used Doodlecharms to cut the ladybug, which I adhered to the ribbon. I also gave it some google eyes. I painted some lollipop sticks green and adhered the daisy, cut from Picturesque, onto them. I used my computer for the sentiment, then punched them out with a circle punch. I stuck each flower into the foam to finish off my centerpiece. Each centerpiece has two sides and both sides look the same. 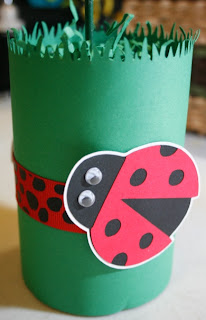 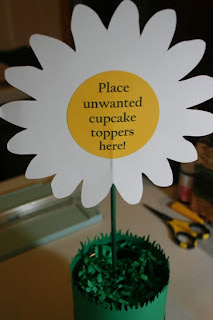 These are the thank you cards I created. They are 4 1/2"x6 1/4." My cousin's wife wanted to be able to put a 4"x6" picture in them of the birthday girl. I made them look like the invites, except that instead of having "you're invited" on them they say "many thanks." I used a stamp for the sentiments on both the outside and the inside. The ladybug is from Doodlecharms, the daisy is from Picturesquet and the leaves are from Mother's Day Boquet. 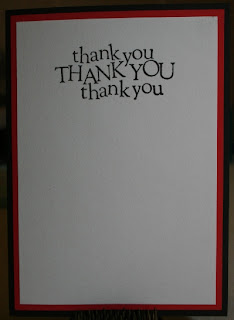 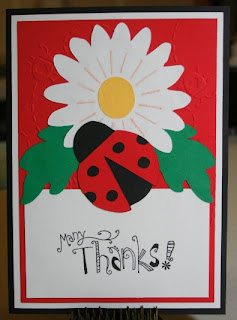 I also created a 6 1/2" ladybug from Doodlecharms, which will be placed on the gift bags that my cousin's wife has already bought. The signs are made with the same font, Tear Drop, as the Pin the Spot on the Ladybug game and are on the same posterboard. I also cut out an arrow for each sign, but didn't glue it on yet, that way they can be adhered later, when the signs are in place.