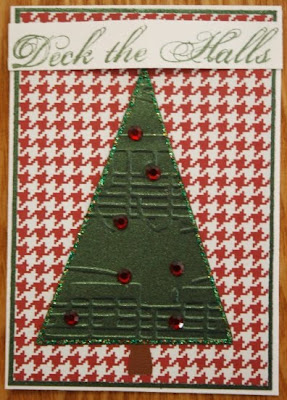 This is a simple, small card, only 3 1/2"x5." I used white cardstock for the base, trimmed some shimmery green cardstock 1/8" smaller and some red houndstooth cardstock 1/8" smaller than the green. The tree is cut from Christmas Cheer at 5" (it actually comes out to about 4"). I used my Gypsy to cut it so that I could hide the interior cuts on it. I embossed it with my Cuttlebug and the Allegro embossing folder. I adhered it to the card and used some holly Stickles on the edges of the tree. I added some red gems as well. The sentiment is stamped on white cardstock, using pearlescent ivy ink by Tsukineko. I cut the sentiment into a strip, then adhered it to the card, using pop-dots in the middle to give it some lift. Super simple, but I think it turned out quite pretty. 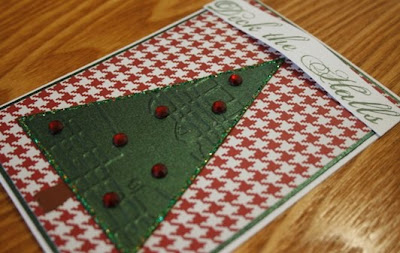