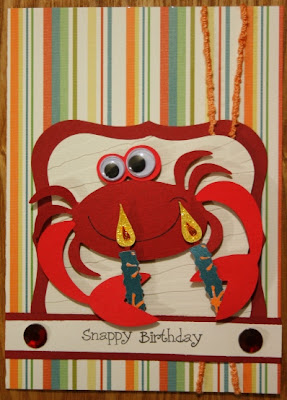 Here is a fun birthday card I made. January is another month of birthdays. Aside from mine, I have a couple of cousins, a friend, my best friend's son, even my trainer's birthday is in January. There are probably more that I can't remember off the top of my head too. So, I think I will be making birthday cards like crazy, either that or seeing what I have sitting around. :)

This card is 4 1/2"x6 1/4." I used a striped cardstock, which is from the Mediterranean Stack by DCWV, for the card base. I used a Nestabilities label die for the red and cream labels. I adhered the red one down, then wrapped the card with some orange fiber. I embossed the cream layer with one of the animal print folders, to me it looks like zebra stripe. I adhered the cream layer over the fibers. The crab is from Life is a Beach, cut at 3." I gave him some google eyes and drew in his mouth. I used pop-dots to adhere him to the label. The candles are from Wrap It Up. They are cut at 2" and I added some yellow and orange Stickles to the flames. I adhered them so it looked like the craby was holding them. I stamped my sentiment on some cream cardstock, then matted it with red cardstock. I adhered it to the bottom and added two large red gems. For the inside of the card I cut some red cardstock 1/8" smaller than the card base, then some cream cardstock 1/4" smaller than the red. I used a computer to create the "hope it's" part of the sentiment. I then stamped the "crab-u-lous" part of the sentiment. Both the sentiment stamps are from My Pink Stamper. I trimmed it and matted it with some red cardstock. I also cut another candle out from Wrap It Up, this time at 3." I also used yellow and orange Stickles on the flame again. I just love terrible puns and I thought this one was too good to pass up! 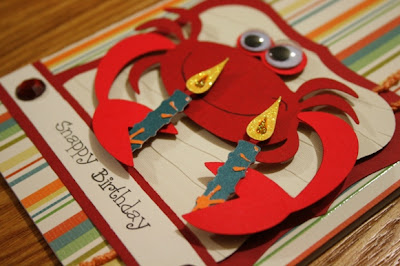 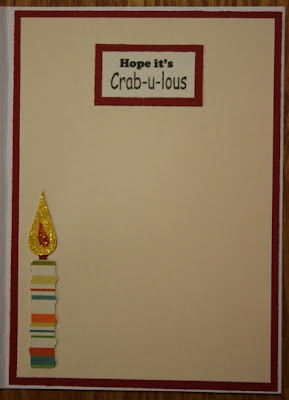 Email ThisBlogThis!Share to TwitterShare to FacebookShare to Pinterest
Labels: Cuttlebug, Life is a Beach, Spellbinders, Wrap It Up