I received a lot of compliments on the quilt block card I made for a co-worker once I brought it to work for people to sign.  You can see the original post here.  One of my other co-workers liked it so much that she asked if I would make a similar one for her to give to her grandmother for her birthday.  All she really told me was that she wanted the design I had created, but with "happy birthday" on the front.  This is what I came up with: 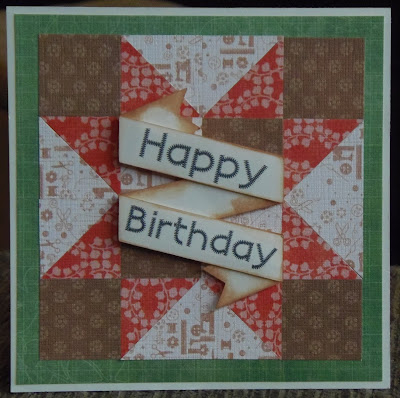 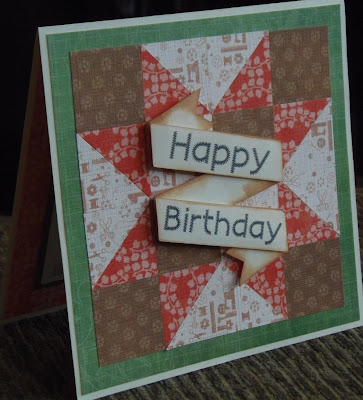 The card is the 6"x6" and I made it from ivory cardstock.  I cut some green patterned cardstock at 5 3/4"x5 3/4."  The blocks are all made from patterned cardstock cut at 1 1/4" squares, some of which are cut diagonally to create triangles.  I adhered them all to the green cardstock in my quilt block pattern.  All the patterned paper that I used is from the Crafty Stack by DCWV. 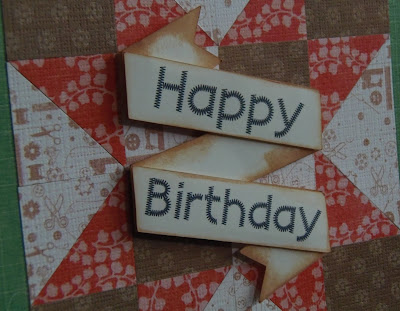 I used my Silhouette to create my banner and sentiment.  The font is "zigzag" a free stitch pattern I found online.  I used the print feature to print the sentiment.  I then cut the banner, making sure to place the layers over where I had the font printed.   The banner is a cut I found in the Silhouette Store, it is called "vintage banners and seals," by Lori Whitlock (#33078).  I only used the banner part of the cut.
﻿
Posted by Paula Bee at 3:00 AM