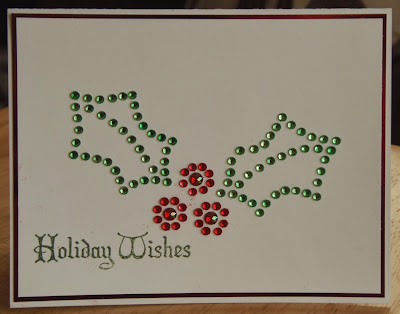 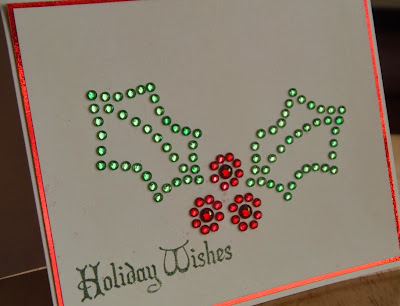 The card is 5 1/2"x4 1/4" and made from white card stock.  I cut some foiled red card stock at 5 3/8"x4 1/8" and then more white card stock at 5 1/4"x4" to finish of my card base.  I used the Silhouette to cut the holly.  It is a rhinestone image, meaning it cuts numerous small holes to create a stencil or template of the image.  You then fill in those holes with rhinestones to create the image.  The image is called "holly," and it is by Samantha Walker (#5656).  Since I didn't have enough green rhinestones, I colored some clear ones.  The larger red rhinestones are from DCWV and I colored the smaller red ones.  I finished off the card with a stamped sentiment, using pearlescent ivy ink by Tsukineko.
Posted by Paula Bee at 9:19 AM