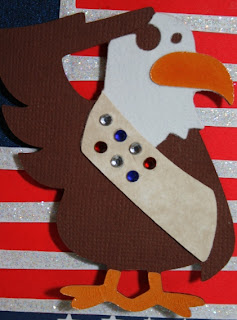 This card is 4 1/2"x6 1/4." I used white cardstock for the base, then cut some red cardstock 1/8" smaller and some blue star patterned paper 1/8" smaller than the red and adhered them all together. The flag is cut from Graphically Speaking at 3 1/2" using the real dial size feature. I cut out the white layer regularly, then cut two flags using the blackout feature (one in red and one in blue). I trimmed the blue flag so that it was just the square, adhered it over the red layer and put it all together. I then used some star dust Stickles on the white layer of the flag for some glimmer. The eagle is cut from Campin' Critters at 3." I flocked his head (the white layer) and used crackle accents on his feet and glossy accents on his beak. I used my Gypsy to cut his sash so that I could hide all the circle cuts within it. I added some red, white and blue bling on his sash instead.

I made this card for the challenge at My Sheri Crafts, which is to create a project with any kind of flag on it. 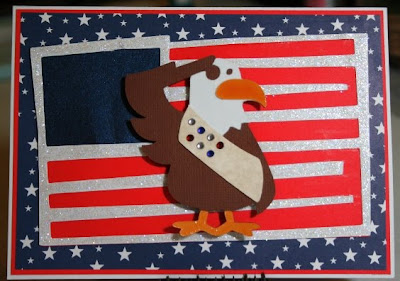 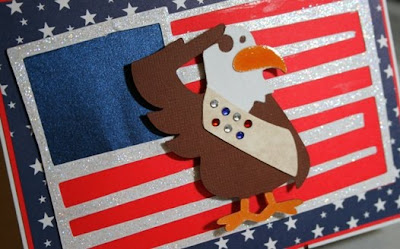