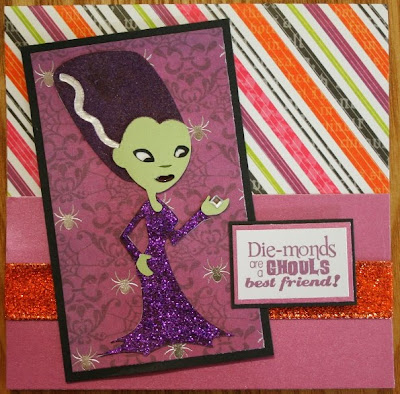 This is a 6"x6" card. The card base is created from striped cardstock from the Midnight Spell Stack by DCWV. I cut some shimmery purple cardstock at 3"x6" and adhered it to the bottom of the card. I then wrapped it with some orange glittery ribbon. The Bride of Frankenstein is cut at 5" from Happy Hauntings. I flocked her hair, used some white Liquid Pearls on the white stripe in her hair, put glossy accents on her lips and covered her dress with purple Stickles. I adhered her to the spider cardstock, which is also from the Midnight Spell Stack. The spider cardstock is cut at 5 1/8"x2 7/8" and I cut some black cardstock at 5 1/4"x3" to mat the spider cardstock. I used pop-dots to adhere the recatangle to the card. I stamped the sentiment, which is from Scrappy Moms Stamps, on white cardstock and trimmed the cardstock to fit, then matted it with black cardstock. I also pop-dotted the sentiment. 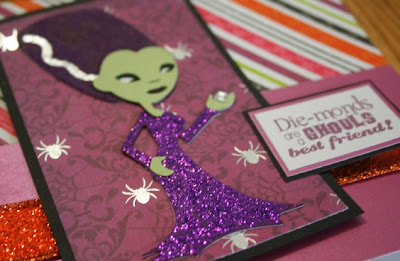 I made this card for a former co-worker who is deployed to Kuwait. I made it this large so that I can bring it in to work for everyone to sign, then we can send it off to her, so she knows we are thinking about her. 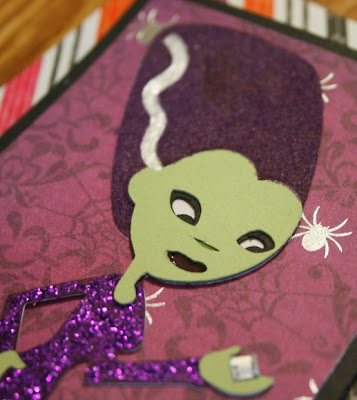 I made the card for the following challenges: