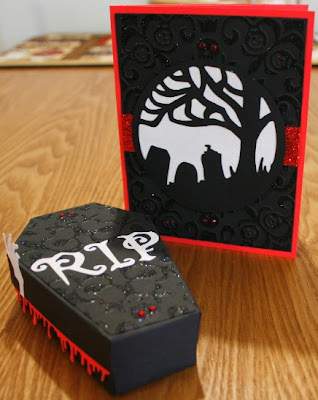 This is a coordinating treat box and card I made for Halloween. The card is 5 1/2"x4 1/4." I used red cardstock for the base. I cut some black cardstock 1/4" smaller and embossed it with the Skeleton Scroll embossing folder. I covered the embossed parts with black diamond Stickles and gave the skeletons red eyes (x-mas red Stickles for the smaller ones and gems for the larger ones). I wrapped the black cardstock with a glittery red ribbon and adhered it to the card base. I cut the graveyard scene from Pumpkin Carvings at 3 1/2." I then cut a white piece of cardstock into a circle to put behind the scene. I used some frost shimmer mist on the white circle before putting the scene on top. It is hard to see the shimmer in the pictures, but it looks really good in person. I then used pop-dots to adhere the circle to the card. 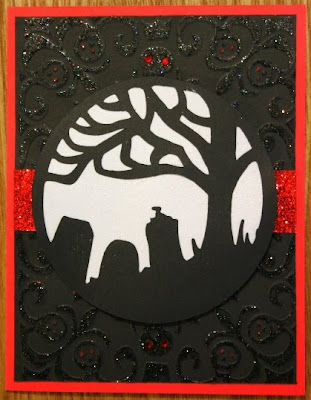 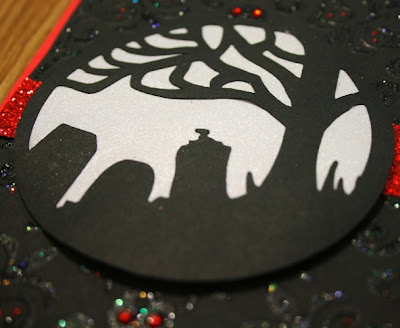 I used Happy Hauntings for the coffin treat box. It is cut at 8." I then cut the layer for it and embossed it with the Skeleton Scroll embossing folder as well. I also used black diamond Stickles on the embossed portions and some red gems for the eyes of the skeletons. "RIP" is also cut from Happy Hauntings at 1 1/4" using the spooky font feature. I cut it out of glitter cardstock. I used the Martha Stewart drippy goo punch to create some blood seeping out of the coffin. The hand is also from Happy Hauntings. It is a layer of one of the frames on this cartridge. I thought the coffin needed someone trying to get out! 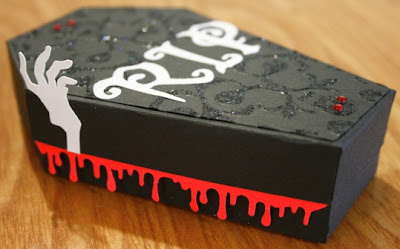 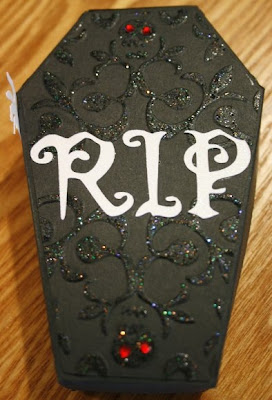 I made these for the following challenges: