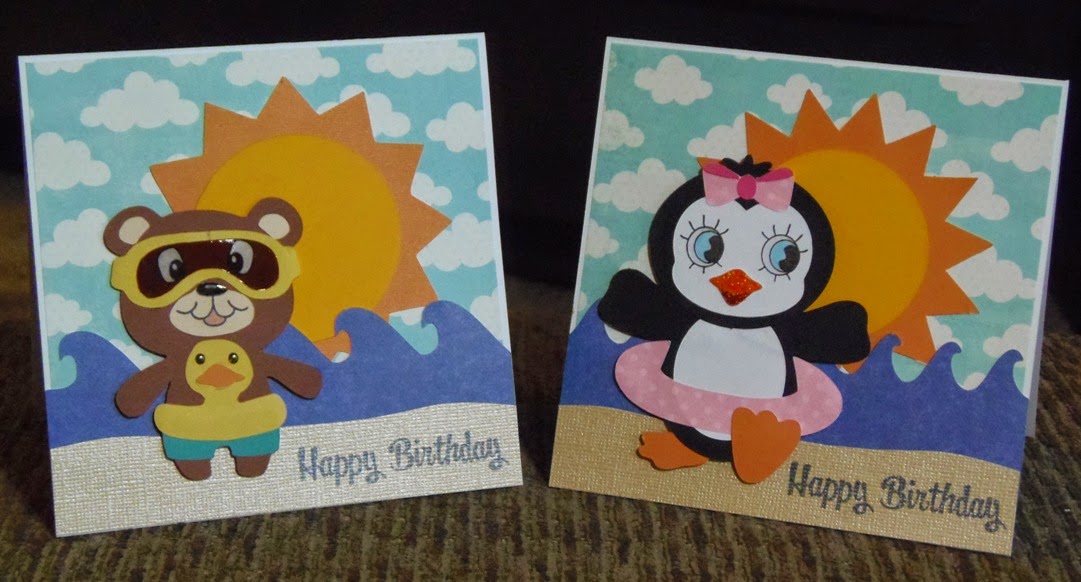 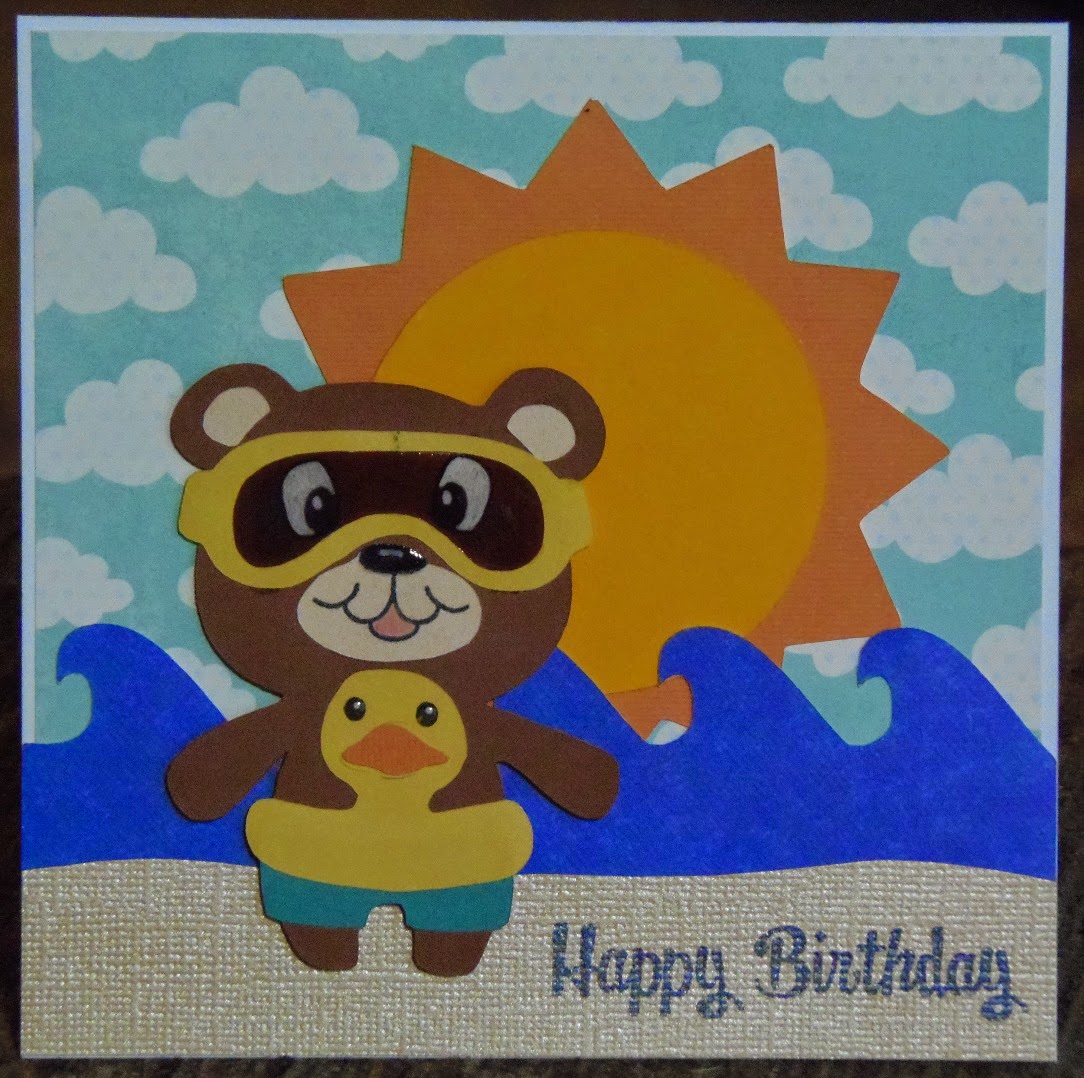 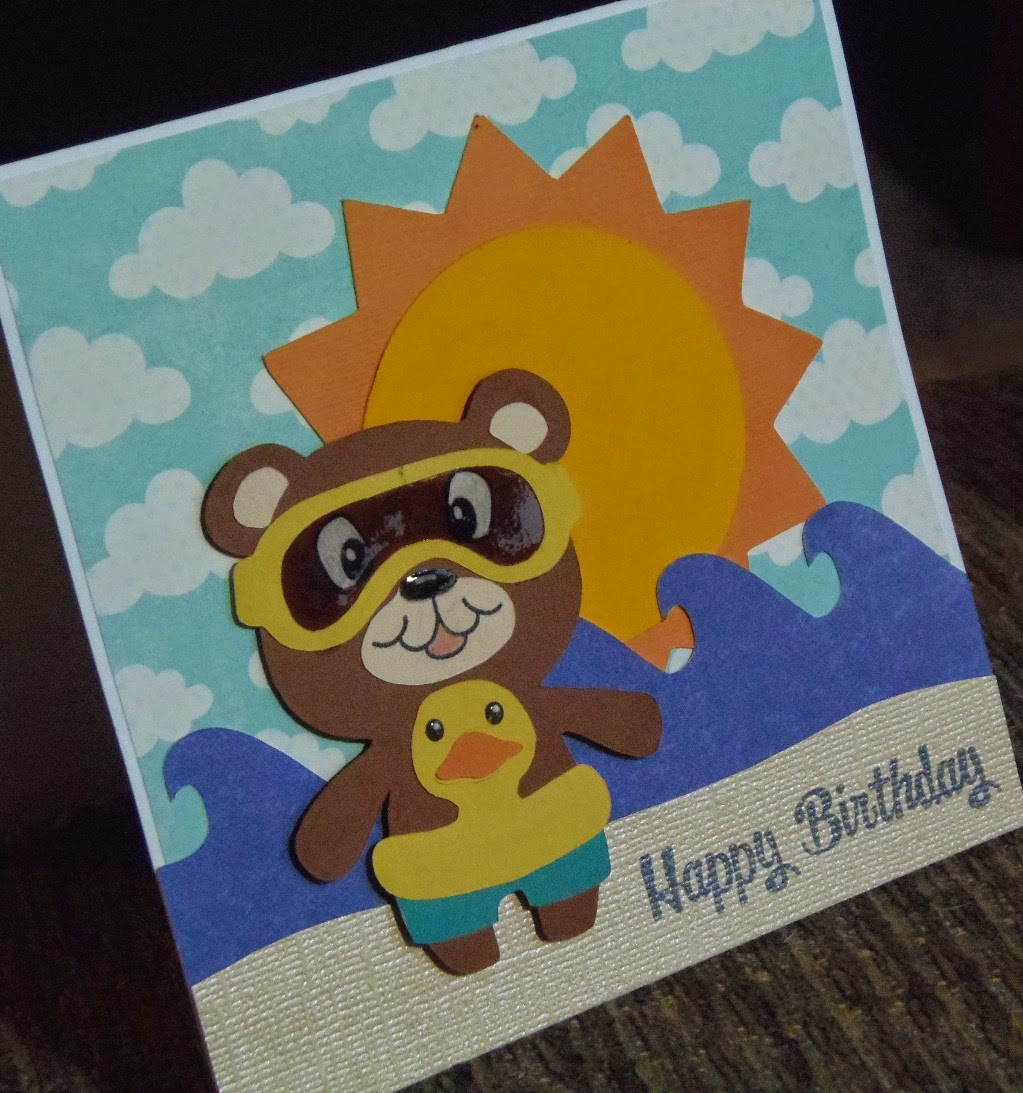 The Cricut card was made with the three different cartridges: "Create a Critter," "Wild Card 2," and "Teddy Bear Parade."  The sun is from "Create a Critter," page 52, with the face hidden in Cricut Craft Room.  It was cut at 3 1/2."  The waves are from "Wild Card 2," page 25.  They were cut to fit the width of the card, 5."  The bear is from "Teddy Bear Parade" and I hid the face of both the bear and the duck inner tube in Cricut Craft Room.  The sand is hand cut. 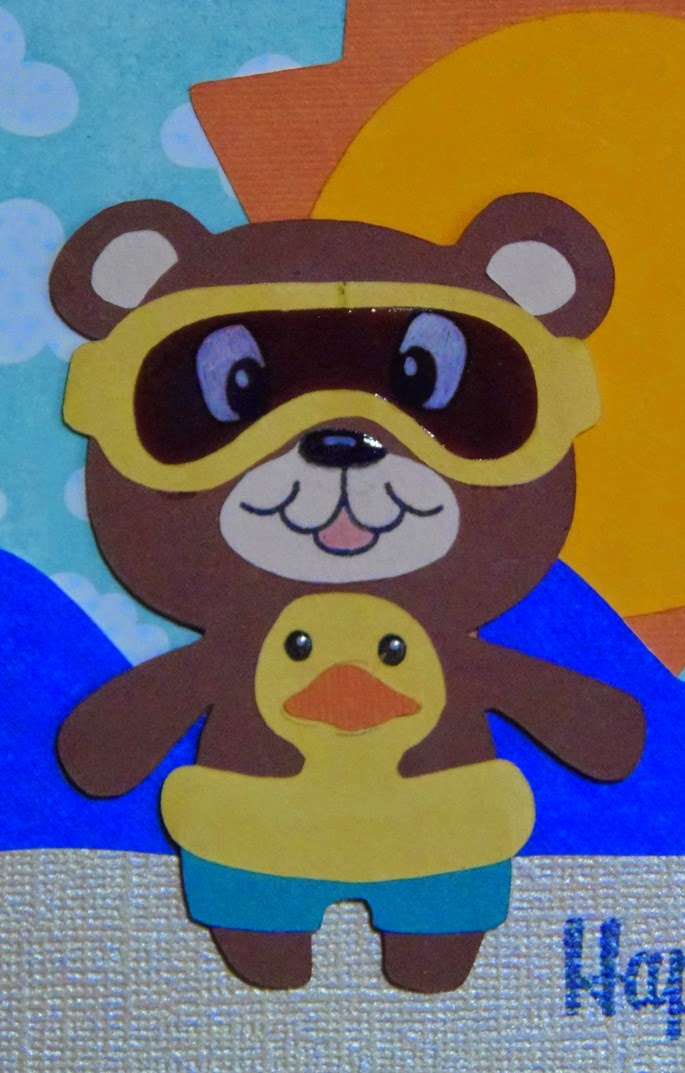 I gave the bear and duck Peachy Keen faces.  The eyes of the duck are from the Kawaii Face Assortment.  I used a white gel pen to add a little accent to each eye and covered them with glossy accents.  The bear's eyes are from the Cornies Assortment.  I accented them with white gel pens and then covered the entire opening of the face mask with diamond glaze.  The bear's nose and mouth is from the Cute and Cuddly Face Assortment.  I colored in his nose, then accented it with a white gel pen.  I also used a light brown gel pen to color in the mouth.  The nose is then covered with glossy accents.  He is adhered to the card with foam tape.  The sentiment is from the June 2014 Stamp of the Month kit. 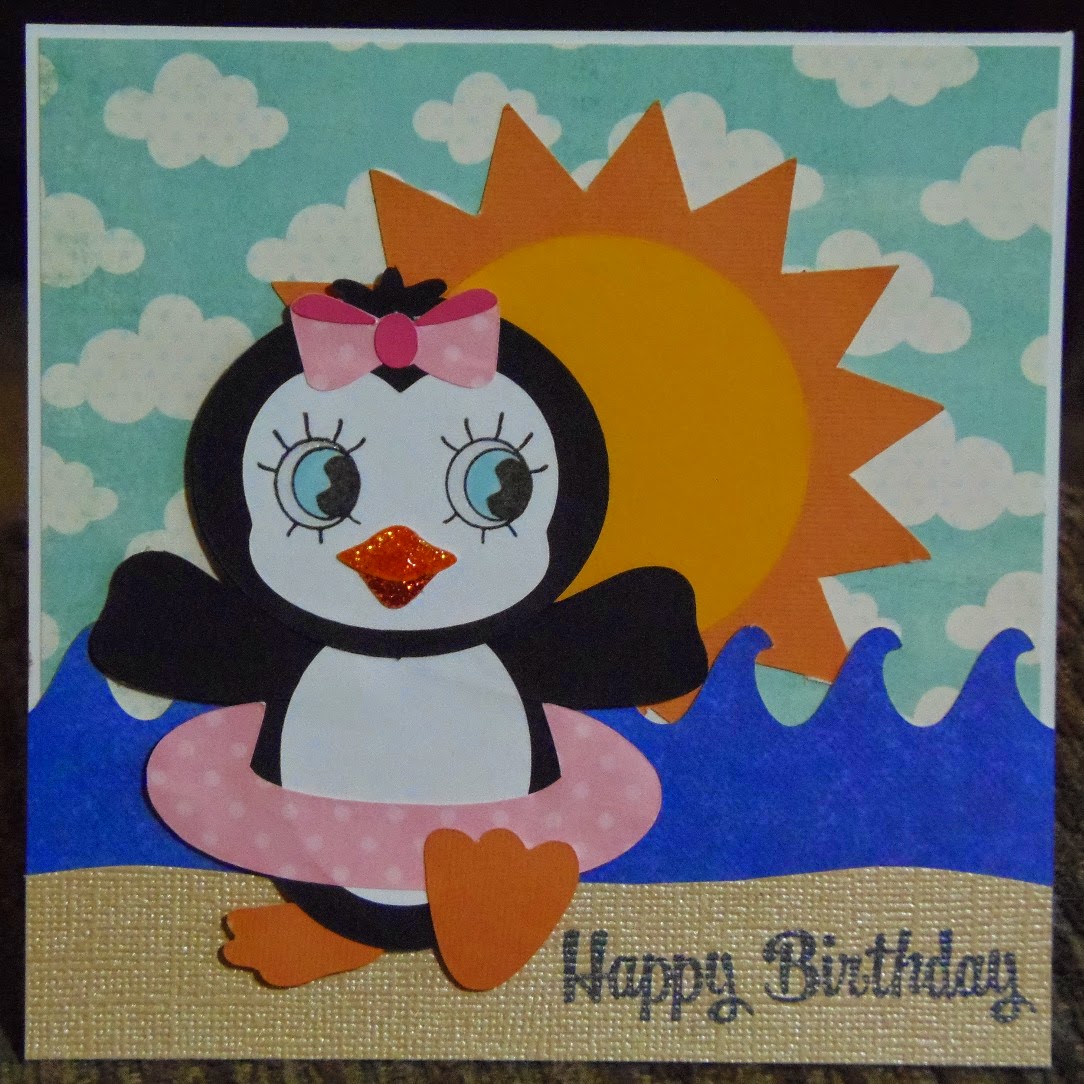 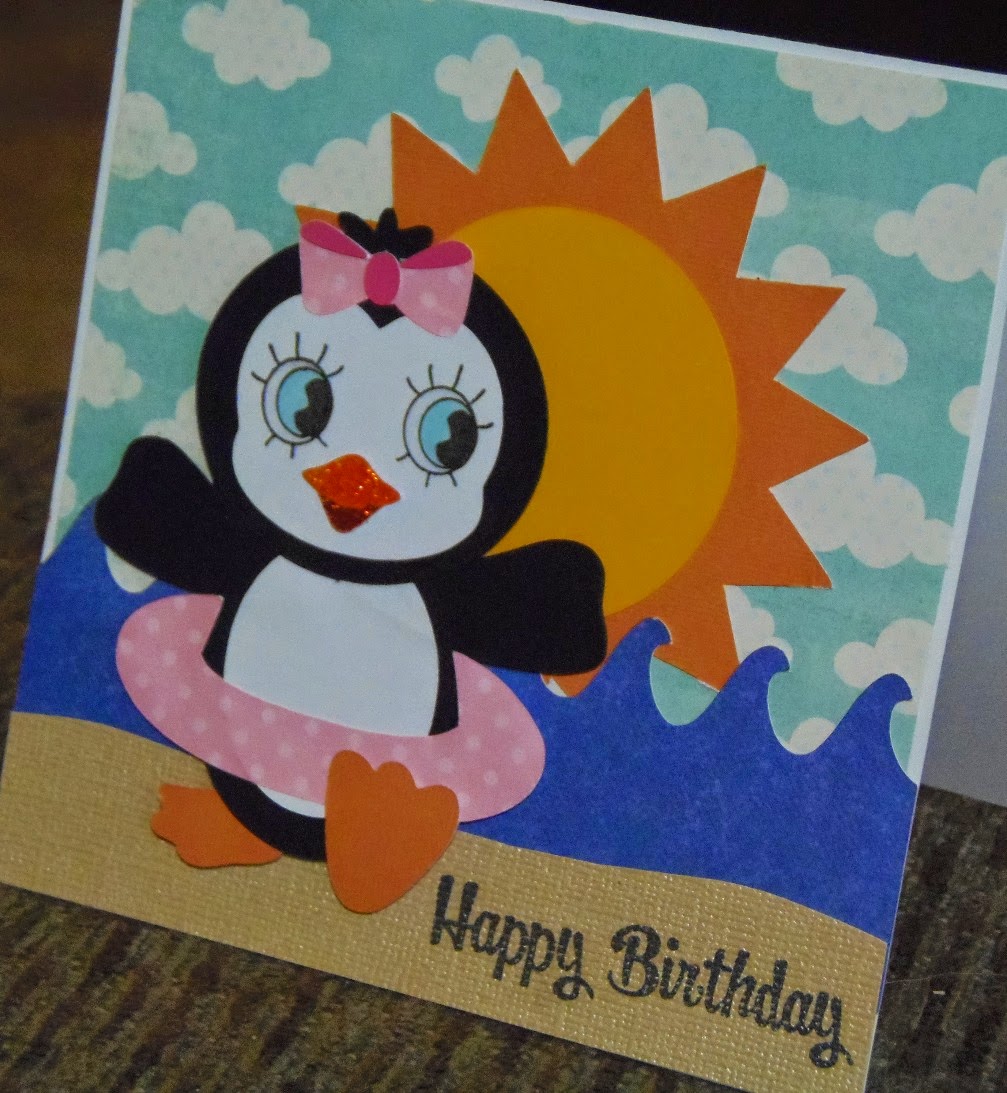 The Silhouette card was made with three cut files found in the Silhouette Store.  The sun is called "Echo Park Sun," and is by Echo Park (#55052).  The waves are called "Wave Border" by Silhouette (#1846).  The penguin is called "Penguin Girl Too Cool Summer" by Stinkin' Cute Paper Piecings (#42587).  They were all cut at as close to the same sizes as the Cricut card as I could make them. 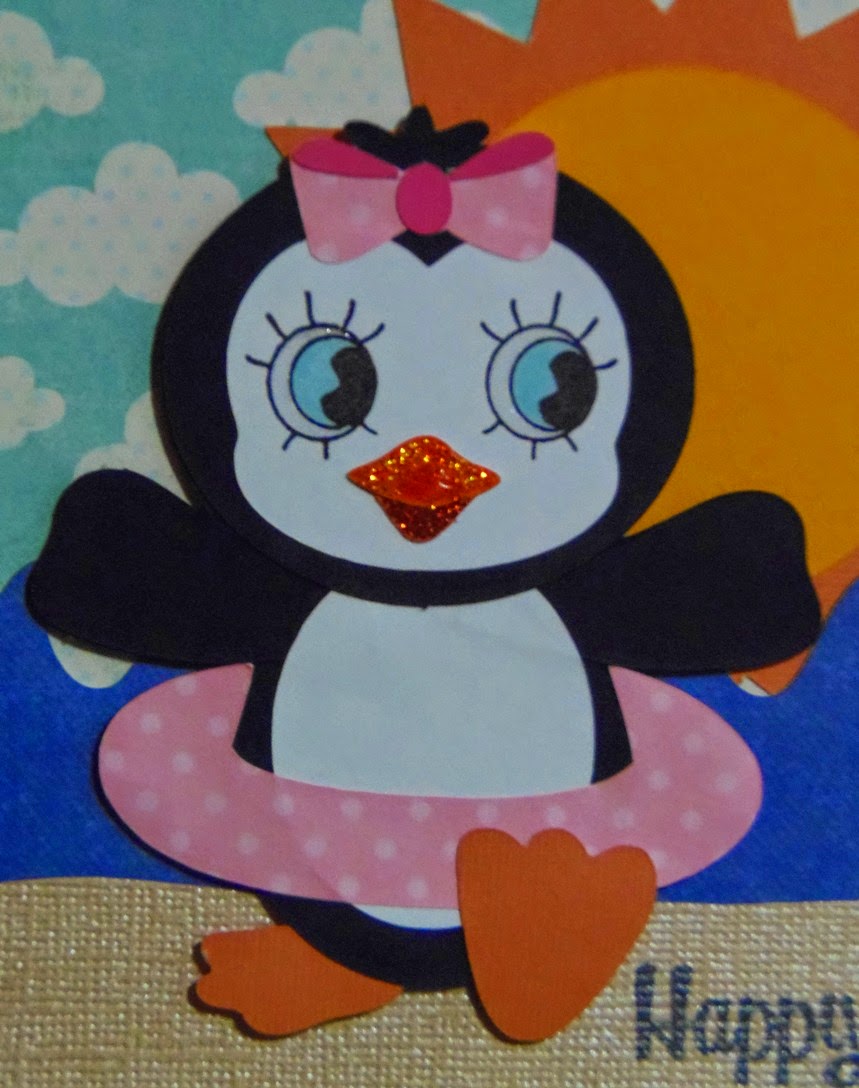 I did not cut the sunglasses for the penguin, so that I could use Peachy Keen stamps for her eyes.  They are from the Cartoon Bombshell Face Assortment.  I colored them in with a light blue gel pen, then added some orange and paprika Stickles to her beak.  She is adhered to the card with foam tape.  The sentiment is the same as the other card, from the June 2014 Stamp of the Month kit.

I made this for the following challenges:
BBTB2: use a sun
Fantabulous Cricut: inspired by the outdoors
Peachy Keen: sketch 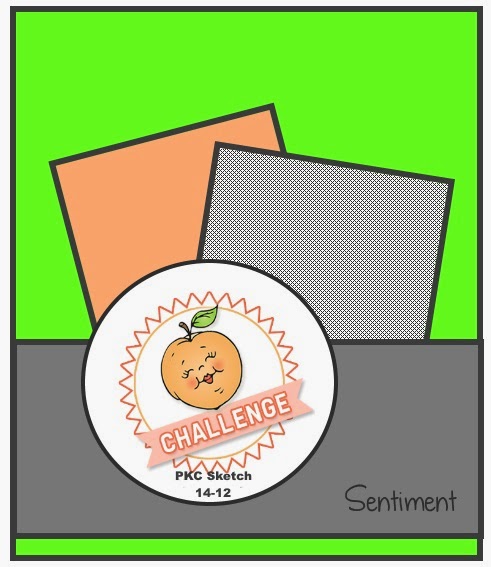