This is my first post as a member of the Perfect Sentiments Design Team!
The challenge this week is "All Creatures Great & Small." The challenge: create a card with a sentiment for the season or occasion of your choice. The twist: incorporate a critter somewhere on your card.

My card is 4"x9." I used black cardstock for the base. I trimmed two pieces of polka dotted cardstock at 2"x8 7/8." Both pieces of the polka dotted cardstock are from the Midnight Spell Stack by DCWV. I wrapped some plaid ribbon around the middle of the card to cover up the seam created by the two pieces of polka dotted cardstock. I found a white circle that was 3 1/2" around in my stash and cut a piece of orange glitter cardstock 1/4." I embossed the white circle with a Tim Holtz folder called Bubble Wrap and lightly inked it with midnight black in by Tsukineko. I used Happy Hauntings to cut the cat at 3 1/2." I covered it in black flock and used limeade glitter on his bat tie, I also gave him orange gems for eyes. I adhered it to the card using pop-dots. I finished off the card with my sentiment. It is a stamp I found in my stash, so I don't know the manufacturer. 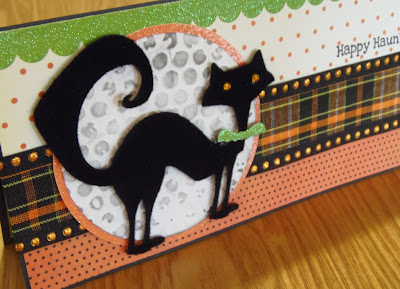 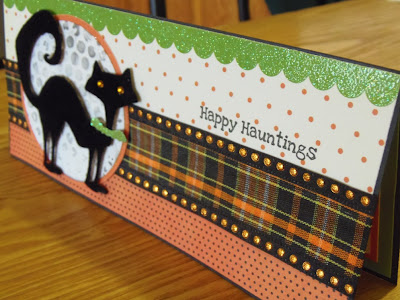 I hope you enjoyed my creation and I hope you decide to play along with our challenge at Perfect Sentiments!
Posted by Paula Bee at 12:00 AM