My cousin's birthday is coming up in a little over a week, so I decided to make her a birthday card and this is what I came up with: 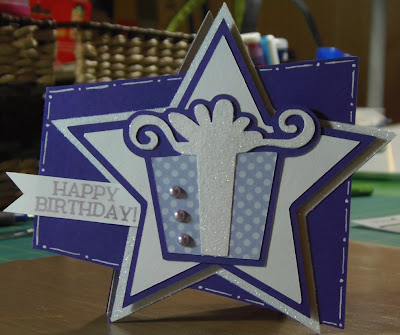 I used Birthday Bash for the shaped card base.  I cut it at 5 1/4."  I then cut the layer, which is the white star.  I covered the star with some white glitter and adhered it to the card base.  I then cut two more stars.  One out of purple cardstock at 4 3/4" and another one out of white cardstock at 4 1/4."  I adhered the white star to the purple one, then adhered the purple one to the card with pop-dots.  The present is from Cricut American Alphabet, cut at 2 1/2."  I covered the white tag in glitter and added three purple pearls to the package.  The polka dotted cardstock is from the Nana's Nursery Baby Boy Stack by DCWV.  I used a Peachy Keen stamp for the "happy birthday" sentiment.  I stamped it on a strip of white cardstock and hand cut it into a banner.  I then adhered one end of it under the purple star.  I finished off the card with a little doodling around the edges, using a white gel pen. 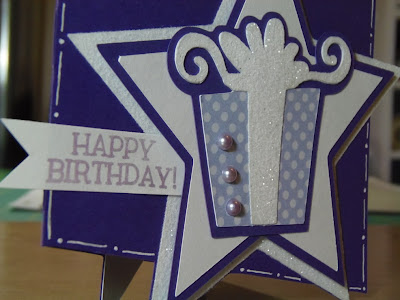 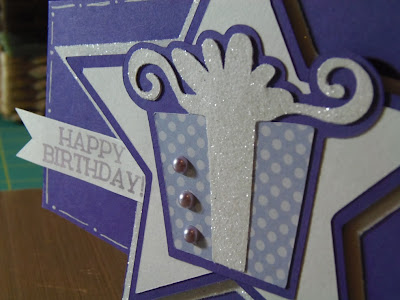 I made this for the following challenges:
Posted by Paula Bee at 10:27 AM