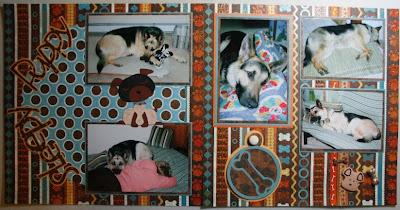 This is a double layout (12"x12") that I created in memory of my German Shepherd, Gin. We just recently had to put him down and I thought this would be a nice way of remembering him. I have enough pictures of him to give him his own scrapbook, so I probably will eventually. The papers/cardstock I used are a mixture of DCWV's Pets Stack, TPC Studio's Paws and Claws Dog stack and ones I had in my stash. I matted all five of my pictures. The two on the left hand page are both 4"x6," as is the vertical picture on the right hand page. The other two on the right hand page are 3 1/2"x5." I matted all of the pictures with a brown paw print cardstock (which is hard to tell), cut 1/4" larger than the pictures. For all but the vertical one, I matted them with the blue cardstock, cut 1/8" larger than the brown mat. On the vertical picture the blue mat is 1/4" larger than the brown. I also gave that one a third mat out of orange, also 1/4" larger. I wrapped the right hand page with two ribbons, the orange bones and brown paws, then added three buttons that I found in my stash and thought were perfect. I cut the large circle from the dotted cardstock at 10" using the pre-loaded E2 cartridge, Cricut Essentials. I used Paper Pups to cut my title. The "puppy" cut was actually "puppy love" on the cartridge, I just didn't cut out the "love" part and paired it with the "sleepy" cut. I used both the shadow and the regular feature to create my title, which is cut at 2." I cut the little dog from Four Legged Friends, at 3 1/2." I used a light ivory color for the body, then chalked over it with some brown chalk to give it a little texture and make it a little darker. I also added some glossy accents to the nose. The tag was created from a mixture of cartridges. The actual tag and its shadow (brown and orange pieces) are from All Mixed Up, cut at 4." The blue paw print circle is from Paper Pups and the ivory circle inside is from George and Basic Shapes. I used my Gypsy to lay it out so that I could make sure the sizes were right and would fit together how I wanted them to. I put a brad through the hole in the tag so that the tag is interactive, it swings to reveal my journaling spot. 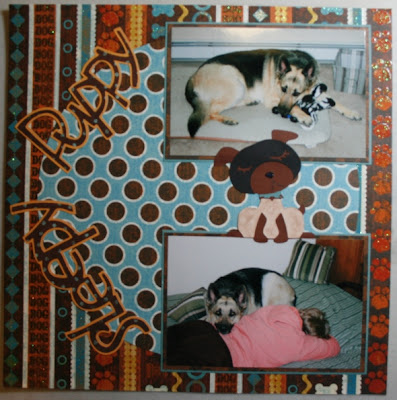 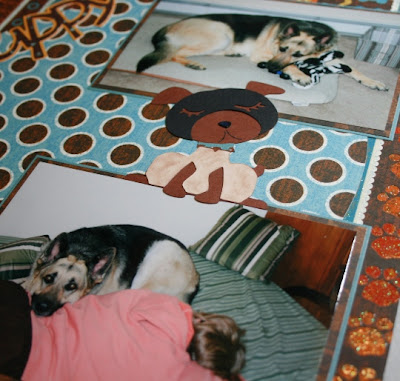 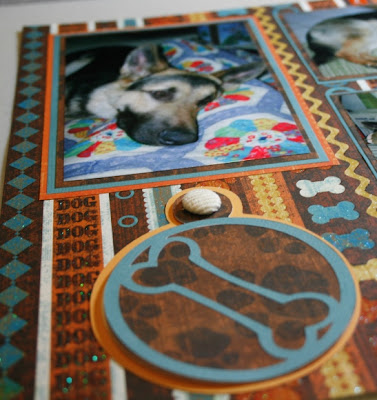 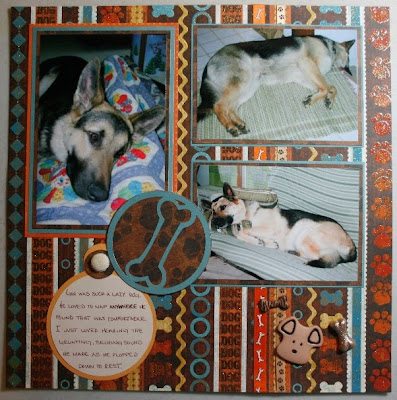 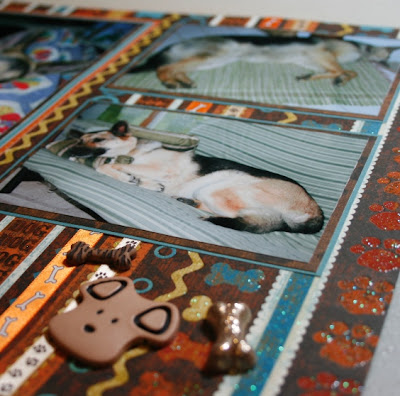