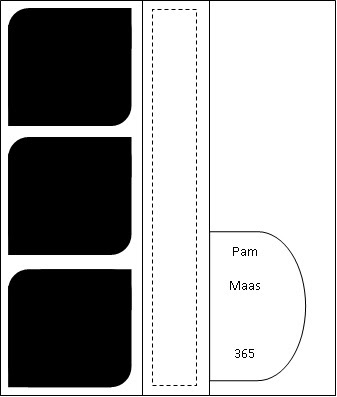 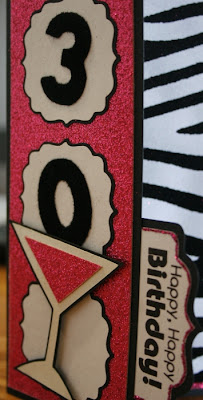 This is my final week being the guest designer at 365 Cards. It has been a lot of fun and I hope you have enjoyed my creations using Pam's sketches.

This is my interpretation of sketch #54, this week's Super Sketchy Sunday sketch. As soon as I saw the sketch I knew that I wanted to create a tri-fold card. The card is 4 1/2"x6 1/4" when it is all folded up. The smaller fold (on the left) is 2 1/2" wide and the larger flap (on the right) is 4" wide. I covered both flaps with the glittery pink cardstock, which is by Recollections. The pieces are cut 1/4" smaller than the flaps they are on. For the larger flap I also added some flocked zebra stripe paper. It is cut 1/4" smaller than the pink cardstock. The labels were cut using Elegant Edges. The three on the flap are cut at 2" and I used the regular and shadow features for them. The label that is coming off the lower right portion of the small flap is also from Elegant Edges. It is the "book" feature. It is the same label as the other ones and is cut at 2 1/4 (white layer) and 2 1/2" (black layer). I stamped my sentiment, which is from Scrappy Mom Stamps on the label and adhered it to the back of the flap. I then added some magenta Stickles around the edge of the white part of the label. I used Birthday Bash to cut out the "3" and "0" at 1 1/2." I then flocked them with some black flocking powder. The martini glass is from Cuttin' Up and cut at 2." I used pop-dots to adhere it to the card. 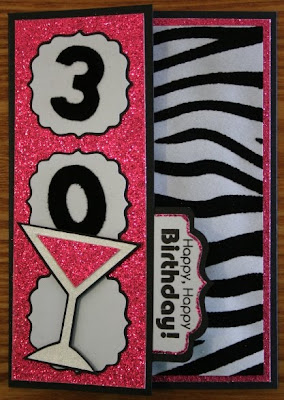 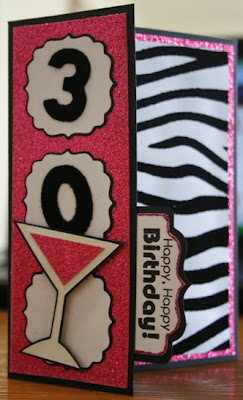 I am also entering this card in this week's Cupcake Inspirations challenge.
Posted by Paula Bee at 8:00 AM