Congrats on Getting Your Wings 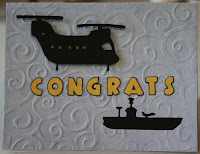 My brother is getting his wings to be a helicopter pilot in the Navy on Friday. I made this card for him and sent it to him a week ago, but had to wait until he got it before I could post it. Well, he finally got it so here it is. This is not the kind of helicopter he will be flying, but that's all I could find. I used the card feature on Stand and Salute to make the aircraft carrier card and then pop-dotted the helicopter. I used the Cuttlebug on the card, to kinda make it look like water. The "congrats" is from Robotz and the "on getting your wings" is computer generated. The wings on the inside are from A Child's Year, not Navy wings, but again it was all I could find. He said he isn't offended, which is all that matters.
Posted by Paula Bee at 1:04 AM