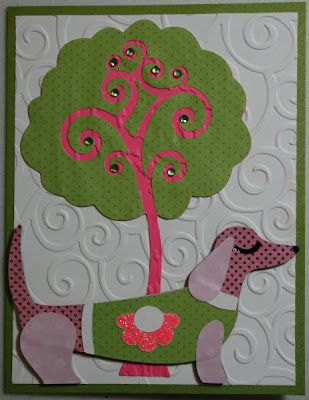 Here is a 5 1/2"x4 1/4" card. I used a shimmery green cardstock for the card base. I then cut some white cardstock at 5 1/4"x4" and embossed it with the D'vine Swirls folder. I cut the tree from Straight From the Nest at 5." I embossed the pink layer with a Sizzix folder called Woodgrain. The dachshund is from Paisley, cut at 2 1/4." I used pop-dots to adhere the dachshund to the card base. I added glossy accents to the nose and eyes of the dog, some glam pink Stickles to the flower on the dog and finished it off with some green gems on the tree. 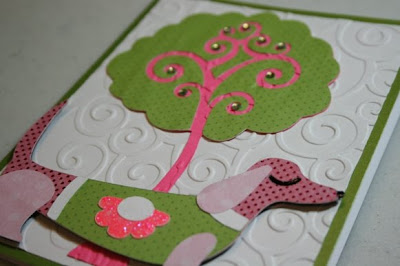 Email ThisBlogThis!Share to TwitterShare to FacebookShare to Pinterest
Labels: Cuttlebug, Paisley, Straight From the Nest