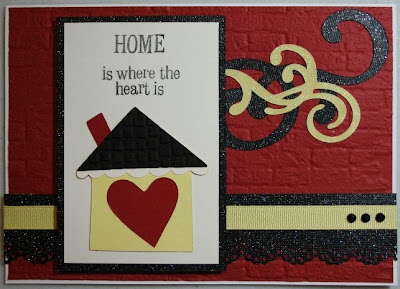 My friends, who are getting married soon, just bought a new house and I thought I should send them a card congratulating them on that milestone. There were a couple of challenges that are perfect for that occasion so, I made this card, which is 5"x7." I used a white cardstock for the card base, then cut some red cardstock 1/8" smaller. I embossed the red cardstock with a Sizzix embossing folder, called Bricked. I cut a strip of glittery black cardstock, which is from Core'dinations, at 7"x1 1/2." I then used a Martha Stewart border punch on it. I wrapped it with some ribbon that I got at Michaels and added three rhinestones, which are from Bazzil. The flourishes are cut from Cindy Loo. The large black one is cut at 2" and the yellow one is cut at 1 1/2." The glittery yellow cardstock is from DCWV, the Glitter Stack. The plain cardstock is all from my stash, I don't know who the manufacturer is any more. I cut a mat from the glittery black cardstock at 3"x4 1/2, then cut some cream cardstock 1/4 smaller. The house is cut from Hoot 'n' Holler at 2 1/2." I embossed the roof with the Cuttlebug Tiny Mosaic folder. The sentiment is actually two seperate stamps from Close to My Heart. I used some foam adhesive to adhere that all down to the card. 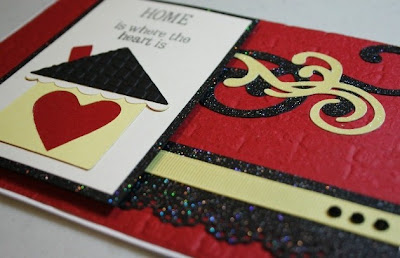