This is a 5"x5" card. I used a dark purple cardstock for the base. I trimmed a piece of glittery patterned cardstock at 4 3/4"x4 3/4" and piece of white glitter cardstock at 4" square. I adhered the white square to the floral one and wrapped a patterned ribbon around it. I then tied a piece of purple ribbon around the patterned one. Piglet is cut from Pooh & Friends at 4." The flowers are also from Pooh & Friends, they are the icon feature of the Tigger face. I cut them at 1 1/2" and adhered them to Piglet so they look like he is holding them behind his back. I added some pink gems as the centers of the flowers. I cut a strip of pink cardstock at 3"x1/2." I then cut it to look like a banner. I stamped the "happy birthday" sentiment in eggplant ink by Tsukineko. I attached it to the card, using adhesive only on the ends, so there is a rise in the middle. The flowers are from Prima and I used timeless lilac and coral reef Glimmer Mist on them to give them a shimmery colored look. I attached the flowers together with a pearl brad, then used a pop-dot to adhere them to the banner. 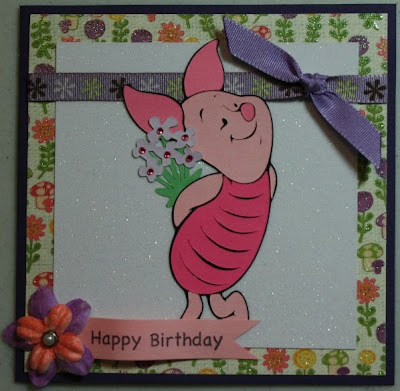 This card is for the following challenges:

Email ThisBlogThis!Share to TwitterShare to FacebookShare to Pinterest
Labels: Pooh and Friends