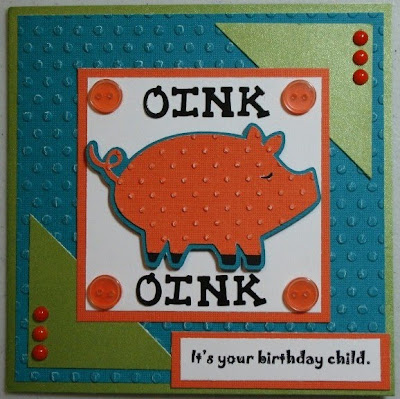 This is a 5"x5" card. I used some shimmery olive green cardstock for the base. I then cut some aqua blue cardstock at 4 3/4"x4 3/4," then ran it through my Cuttlebug with the Polka Dots embossing folder. I cut a 2"x2" square from the green, then cut it in half diagonally to make my corner triangles. I added some orange pearls in the corners. I cut a 3 1/4" square from an orange cardstock, then a 3" square from white. My pig was cut at 1 3/4" from "Just Because" Cards. I embossed the orange layer of the pig in the Swiss Dots folder, then pop-dotted him to the white square. I added four buttons, that remind me of pig noses, to the corners and some alphabet letters to spell out "oink." The sentiment is computer generated and mounted on the same orange cardstock as the pig and the orange square. The inside is layered with the aqua blue cardstock and white cardstock. The other half of the sentiment is in there as well, also mounted on the orange cardstock. The white and black cardstock is from my stash. The colored cardstock is all from the Cafe Mediterranean Stack by DCWV. 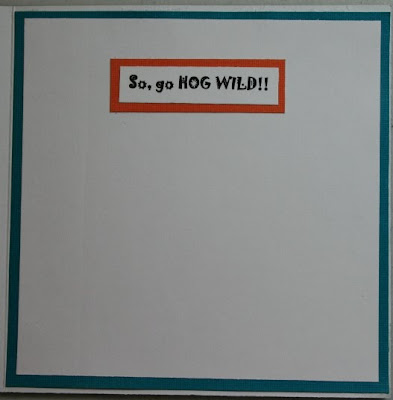 Email ThisBlogThis!Share to TwitterShare to FacebookShare to Pinterest
Labels: Cuttlebug, Just Because Cards