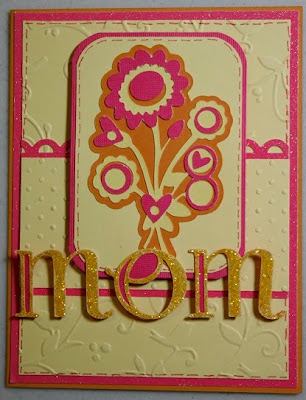 This Mother's Day card is 5 1/2"x4 1/4." I used a dark yellow cardstock for the card base. I then trimmed some pink glitter cardstock 1/8" smaller and some pale yellow cardstock 1/4" smaller than the pink. I embossed the yellow cardstock with the Birds & Swirls embossing folder, then adhered them to the card base. I then cut a strip of glitter pink cardstock at 3 7/8"x2 1/2" and used a Fiskars border punch along the top. I cut a piece of pale yellow cardstock at 3 7/8"x1 7/8" and embossed it with the Swiss Dots folder. I adhered them to the card base as well. I used Holiday Cakes to cut the flowers at 3." I cut two rectangles, one from pink cardstock at 3 1/2"x2 1/2," and one from pale yellow at 2 3/"x3 3/8." I then adhered my flowers to them and used pop-dots to adhere it all to the base. I added faux stitching around the edges of the card base and the rectangles matting my flowers with a pink marker. The sentiment is cut from Lovely Floral. I used my Gypsy to hide the cuts on the pink layer. I then used pop-dots to adhere the sentiment as well. 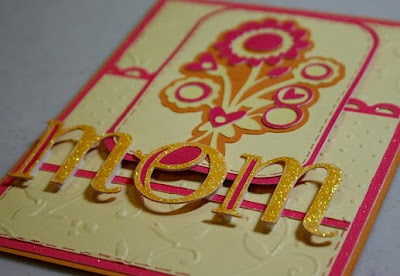