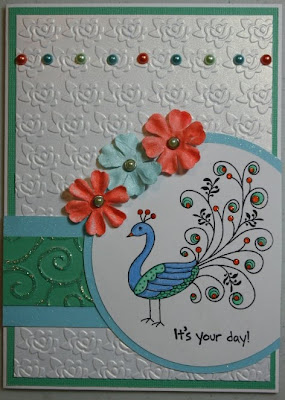 This is a 5"x7" card, made from white cardstock. I cut some mint green cardstock at 4 7/8"x6 7/8" and some shimmery white cardstock 1/4" smaller than that. I embossed the roses onto the white cardstock using one of the Once Upon a Princess Companion emobssing folders. I cut a strip of glittery blue cardstock at 2"x5" and a strip of mint green cardstock at 1 1/4"x5." I emobossed the green strip using the D'vine Swirls folder. I then used some eucalyptus Stickles on the swirls. The peacock image is a stamp from Hero Arts. I stamped it on some white cardstock and colored it with my Prismacolor pencils. I then added some orange pearls and orange peel Stickles to the image and stamped the sentiment. I cut it out in a 4" circle and matted it with a 4 1/4" glittery blue circle. I adhered that to the card and trimmed off the part of the circle that hung over the edge. I sprayed some Prima flowers with coral reef and sea glass Glimmer Mist and added some green pearl brads to the centers. I then adhered the blue flower to the card and pop-dotted the orange ones. I finished off the outside of the card with some pearls at the top. For the inside of the card, I cut some glittery blue cardstock at 4 7/8"x6 7/8," some orange cardstock at 4 5/8"x6 5/8," some mint green cardstock at 4 3/8"x6 3/8," and some white cardstock at 4 1/8"x6 1/8." I adhered them all down to the card base and stamped my sentiment and image onto the white layer. Both stamps are from Hero Arts. I then used my Prismacolor pencils to color in the peacock feather and finished it off with some orange peel Stickles. 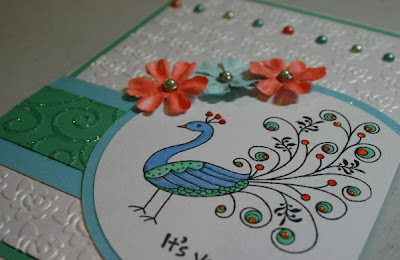 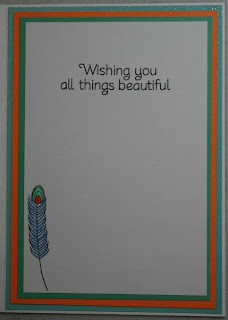 Email ThisBlogThis!Share to TwitterShare to FacebookShare to Pinterest
Labels: Cuttlebug