Song in My Heart 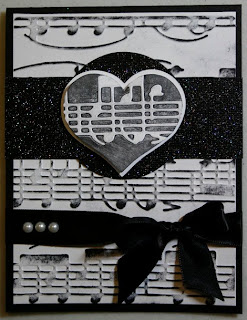 This card is 5 1/2"x4 1/4." I used black cardstock for the card base. I cut some white cardstock at 5 1/4"x4" and then emobossed it with the Allegro folder in my Cuttlebug. I ran some black ink over the embossed image for some added texture. I cut a strip of the glitzy black cardstock at 1 1/2"x4 1/4." I used George and Basic Shapes to cut a 2 1/2" circle from the same glitzy black cardstock. I cut two white hearts, both at 1 3/4," but I used the shadow feature on one of them. I ran the regular white heart through my Cuttlebug. I used the Allegro folder again, but this time I rubbed black ink on the folder so the ink would transfer to the heart and the embossed image would stay white. I used pop-dots to adhere the embossed heart to the shadow heart. I then tied the card with a black ribbon and added three white pearls. For the inside, I cut a piece of white cardstock at 5 1/4"x4" and stamped my sentiment in black ink. The stamp is from Fiskars and the black ink I used for everything was Staz-on ink by Tsukineko. 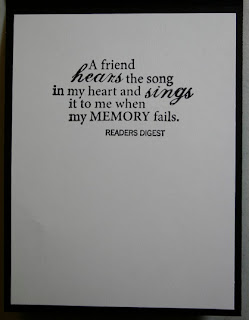 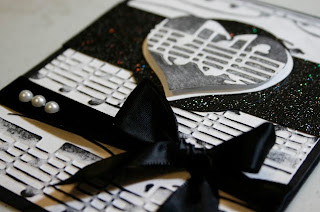 I made this card for the following challenges:
365 Cards: inspired by the sponser (Heartsong Designs)
Card Patterns: sketch #110
Posted by Paula Bee at 3:32 PM