The challenge this week at Flaunt It Fridays is to use the bear in the trash can cut from Give a Hoot. This cut can be found on page 61 of the handbook. 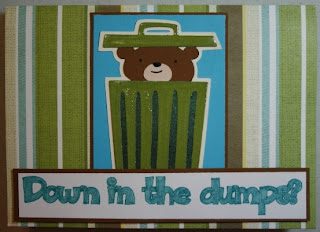 I decided to make a pop-up card for this challenge. I used paper from the Flower Shower Stack from DCWV for the background on both the front and inside of the card. I cut the bear in the can at 3 3/4." I used some glossy accents on the trash can and lid. I cut some cream cardstock using the shadow feature, then mounted the bear on some teal cardstock, which I trimmed to fit. I then cut some brown cardstock 1/8" larger than the teal. I used my Cricut markers to write out the sentiment, using Cuttin' Up for the font (the cartoon feature). The brown cardstock is 1/4" larger than the white cardstock the sentiment is written on. I used pop-dots to adhere the sentiment to the card. The bear on the inside is cut at 2 3/4" from ZooBalloo. I cut another trash can lid from Give a Hoot that fit the bear. I used glossy accents on this lid as well. The sentiment on the inside is cut using Cuttin' Up (regular feature) at 1." I then glittered the whole phrase. 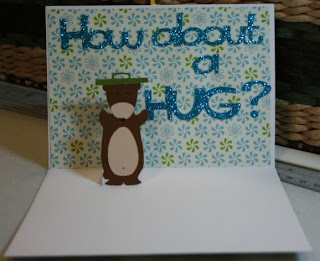 Hope you come on over to Flaunt It Fridays and flaunt your bear in a trash can. If you don't have the Give a Hoot cartridge, then find a similar cut or image and use that. Can't wait to see what everyone comes up with!! Enjoy!!
Posted by Paula Bee at 2:01 AM

Email ThisBlogThis!Share to TwitterShare to FacebookShare to Pinterest
Labels: Cuttin' Up, Design Team, Give a Hoot, ZooBalloo