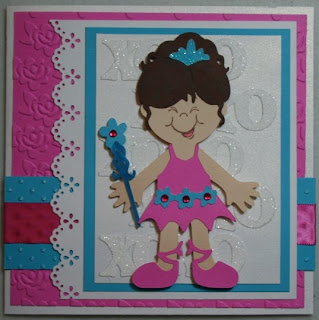 The challenge at My Creative Time is to use Paper Doll Dress Up or Everday Paper Dolls and add some embossing. I chose to use the pixie on Paper Doll Dress Up. I thought she would make a cute little Valentine's Day card for a little girl. I used the sketch and theme of "M is for Magical" at ABC Challenge. I also am entering this in Alphabet Challenge, which is "L is for Ladies;" they want to see ladies on your projects. This week's Let's Face It Friday at Peachy Keen is to use their face stamps and also use X's and O's on your project. Finally, I also made this for Papercraft Star. Their challenge is to use some or all of the colors (magenta, orange, teal, aqua) and to use two or more of the following elements: ribbon, embossing, stamped image and die cut. 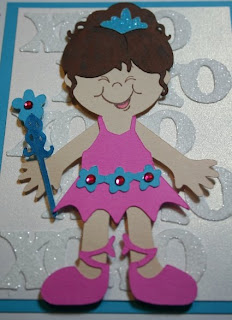 The card is 5"x5" and made of a shimmery white cardstock. I cut a piece of magenta cardstock at 4 3/4"x4 3/4." I then embossed the cardstock with one of the Once Upon a Princess companion folders. The aqua strip is cut at 5"x1 1/2" and embossed with the Swiss Dots embossing folder. I wrapped some ribbon around it and adhered that to the card. I cut a piece of white cardstock at 4"x4 1/2" and punched it with a Martha Stewart border punch. I cut some aqua cardstock at 3 1/4"x4 1/4" and some shimmery white cardstock at 3"x4." I used the Stamping cartridge to cut out the XOXO that is in the background, they are cut at 3/4." I then glittered it with some white glitter. The little pixie is cut from Paper Doll Dress Up and cut at 3 1/2." I inked her hair a little and added some gems to the flowers on the belt and wand. I used a Peachy Keen stamp for the face and colored in her mouth. She is pop-dotted to the card for some added dimension.
Posted by Paula Bee at 4:04 PM