Word of the Day Cards Part 1

This whole week at 365 Cards they are doing a word of the day challenge. Each day they have a new word and you have to make a card using that word. I'm not sure why, but I wound up waiting until the end of the week to work on my cards for them, but here they are, at least the first three. I will have the final three tomorrow. I also combined them with other challenges, I will let you know by each card what other challenge is represented. :) And, like always, I will let you know how I made them. 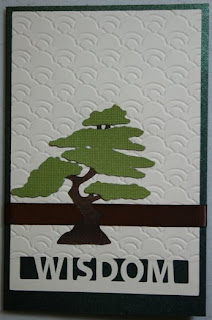 Monday's word of the day was "Wisdom." I made this card using the sketch from Clean & Simple and I also used the challenge at My Sheri Crafts, which was "organic." She asked for your interpretation of the theme. To me it was a natural feeling card, so I used greens, browns and creams for my colors and a tree as my image. The card is 5 1/2"x3 5/8." I used a shimmery green cardstock for the card base. I cut the cream cardstock using Pagoda and the Kanji Word feature at 5." I then embossed the top part of the cut with the Japanese Scales embossing folder. I wrapped a ribbon around the card and then added my image. I used one of the bonsai trees from Pagoda, cut at 2 1/2." I used my computer to write the sentiment for the inside (which I don't have a picture of). It says, "Wisdom is not attained by years, but by ability." -Plautus 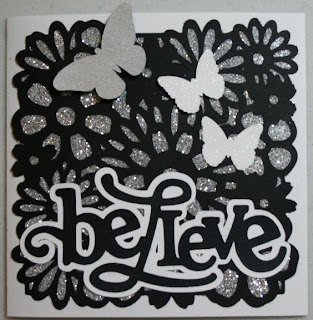 Tuesday's word of the day was "Believe." I used sketch #174 at Mojo Monday for this one and the color combo at Crafting with Cristina. Her color challenge was black, white and grey or silver. This is a 5"x5" card. I used white cardstock for the base. I then cut some black cardstock using Paper Lace at 4 3/4." I then glittered the cut out pieces of the lace with some silver glitter. The two small, white butterflies are from a Martha Stewart punch. The large, silver butterfly is from Picturesque and is cut at 1." The sentiment, "Believe," is from Gypsy Wanderings and cut at 2." I left the inside blank on this card. 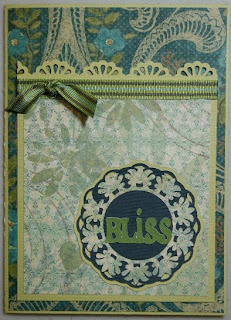 Wednesday's word was "Bliss." I made this card using sketch #99 from Card Patterns. I made this a 4 1/2"x6 1/4" card. I used a light green cardstock for the base. I then cut a piece of floral patterned paper 1/8" smaller than the card base. I cut some more of the light green cardstock at 4"x5" and then used an EK Succes border punch at the top of the piece. The green patterned paper is cut at 3 3/4"x4." I then wrapped a ribbon around the piece and tied a knot with a small piece of the ribbon and attached it with a glue dot. I didn't have enough ribbon to actually tie it around the piece, so I improvised. The label with the sentiment on it is from Lacy Labels, cut at 2 1/2."
Posted by Paula Bee at 4:35 PM