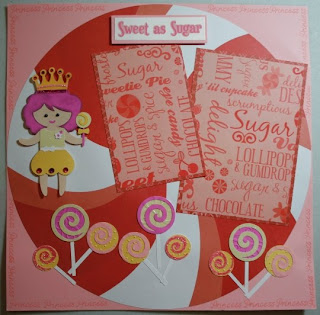 I seem to be on a layout making kick. I don't even know what I am going to use half of them for, but I am really getting into making these layouts. I used the sketch from The Paper Variety for this layout. The challenge at Made By Momo is to create something with a princess theme. This paired really well with the challenge at The Cuttlebug Spot, which was to be inspired by a children's game. Between the sketch and the princess theme all I could think of was Candy Land and Princess Lolly, so this layout is inspired by Princess Lolly. :)

The layout is 12"x12." I used some pink cardstock for the background. I then adhered a large piece of paper shaped like a candy mint onto the pink cardstock. I can't remember the brand of the paper, but I got it at JoAnn's a year or so ago when it was on clearance. I cut two mats for each photo. The smaller mat is for a 3"x5" photo and the larger is for a 4"x6" photo. I stamped around the edge of the page with a sentiment stamp from My Pink Stamper. I used pink grapefruit ink by Tsukineko. My version of Princess Lolly is cut from Once Upon a Princess at 4 1/2." The crown she is wearing is also from Once Upon a Princess and cut at 1." I added some Stickles and jewels to the crown and her dress. The lollipops are cut from Paisley and Mickey and Friends. The three largest lollipops (glittery yellow and magenta) are from Mickey and Friends. They are cut at 2 1/2." I then embossed the lollipop with the D'vine Swirls embossing folder. The rest of the lollipopos are from Paisley. I cut three at 2" and three at 2 1/2." I embossed them with Swiss Dots. I added Stickles to the three smallest lollipops. The title is a sticker that I found in my stash and thought fit the page perfectly. I adhered it to some shimmery white cardstock and then matted it with some pink and used pop-dots to adhere it to the page. 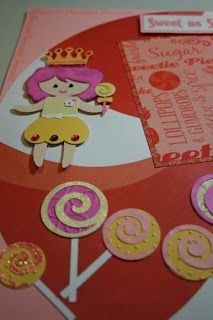 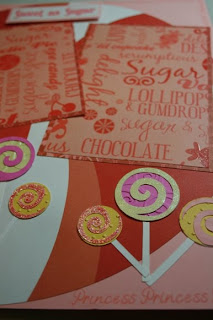 Email ThisBlogThis!Share to TwitterShare to FacebookShare to Pinterest
Labels: Cuttlebug, Mickey and Friends, Once Upon a Princess, Paisley