I have three cards for you today. The first is a Mother's Day card, the second a wedding card, and finally a thank you card.
The Mother's Day card is for Friday's 365 Cards challenge. Their challenge was to use teabag folds on your card. I did the dahlia fold and made a large flower. I found instructions here, if you would like to try your own. 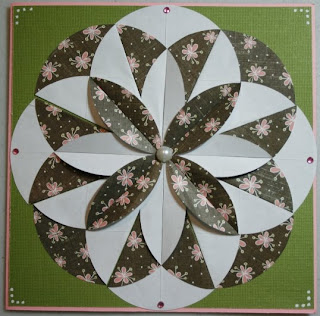 The card is 6"x6." I made it out of pink cardstock and layered it with a green cardstock, cut at 5 7/8"x5 7/8." I adhered down the eight pieces of the flower and added a flat-backed pearl to the center and pink gems to four of the petals. I then finished it off with some doodling in the corners. It is nice and simple, but looks quite complicated.
I made this wedding card for my cousin, he is getting married in July. I used the sketch from Tuesday Morning Sketches. I also used the challenge that Emma put forth for "Throwback Thursday" at My Creative Time, which was to use an older cartridge and include hearts. I love when I can use challenges to make a card that I needed to make in the first place. 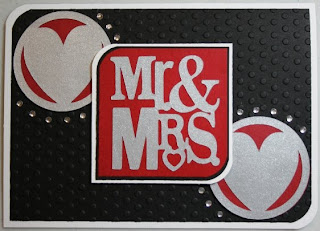 The card is 4 1/2"x6 1/4," and made it out of white cardstock. I layered on black cardstock, cut at 4 1/4"x6" and embossed with the polka dots Cuttlebug folder. The hearts in the circles are from Designer's Calendar, cut at 2." I used silver paper for the hearts and backed them with some dark red. The square in the middle is cut at 2 3/4" in white, the black square is 2 5/8" and the red square is 2 1/2." The "Mr. & Mrs." sentiment is cut at 2 1/4" from Sweethearts. I used a corner rounder on two of the opposite corners on each layer of the card and square. I then used foam adheseive to adhere the square to the card. I finished off this card with some gems for a little bling.
The final card I have today is my Thank You card. I made this card for the Cuttlebug Spot's challenge, which was to be inspired by a book. I chose the children's book, "Ugly Pie." My mother works for a library and does the storytime for children once a week. She read this book recently and even made the pie. She has been talking about it, so I read the book and when this challenge came up it was a no-brainer. :) I also made this for For Fun Challenge, which was a recipe (very appropriate, now that I think about it): 1 image, 2 buttons or brads, 3 papers. I also made this for the Paper Cutz challenge, which is to use metal on your project. 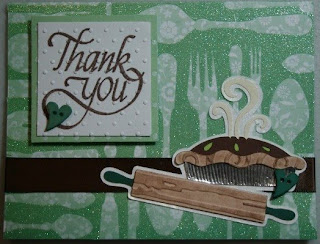 The card is 5 1/2"x4 1/4." I used some glittery patterned cardstock from the Nana's Kitchen Stack, by DCWV. I wrapped some brown ribbon around the bottom part of the card. The sentiment was stamped on a white cardstock square, which is 2." I then ran it through the swiss dots Cuttlebug folder. I layered that on a square of green dotted cardstock, cut at 2 1/4." I added a little heart button to the sentiment and used foam adhesive to attach it to the card. The pie/rolling pin image is from Country Life, cut at 2 1/2." I used some shimmery white paper and cut the shadow of the image. I then cut all the layers. The tin for the pie is cut from craft metal. Once I had it adhered to the image I used an embossing stylus to create the lines in it and make it look more realistic. I embossed the rolling pin with distress stripes and the pie crust with d'vine swirls. Once they were embossed I then chalked them for some dimension.
Posted by Paula Bee at 10:08 AM