The "Flashback Thursday" challenge at 365 Cards today is going back to Day 111: Stunning Silhouette...with a Twist. The challenge there being that you had to use a silhouette on your card (obviously) AND make the card in only black and white (the twist).

There are quite a few Cricut cartridges that have images that lend themselves nicely to silhouetting, even if that isn't a specific creative feature. I reached immediately to A Child's Year, because I just love the sweet images on there, and the bonus is that they are already silhouettes. I was paging through and getting some ideas for a bunch of different things I could do when I saw this image and knew I had to use it. 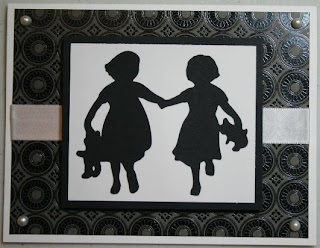 The card is 5 1/2"x4 1/2, out of white cardstock. I used a patterned black cardstock for my next layer and cut it at 5 1/4"x4." I wrapped it with white ribbon and then adhered it on the card base. The image was cut at 2 1/2, from A Child's Year, out of black cardstock. The white cardstock that it is adhered to is 2 3/4"x3 1/4," and the black cardstock beneath that is cut at 3"x3 1/2." I used foam tape to mount the image on the card so that it was raised up. I then added some flat-backed pearls in each corner. The inside of the card has black (cut at 5 1/4"x4") and white (cut at 5"x3 3/4") cardstock layered on the card base. I used a Fiskars stamp and some black Colorbox ink to stamp the sentiment on the iniside of the card. 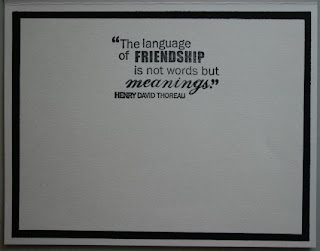 Email ThisBlogThis!Share to TwitterShare to FacebookShare to Pinterest
Labels: A Child's Year