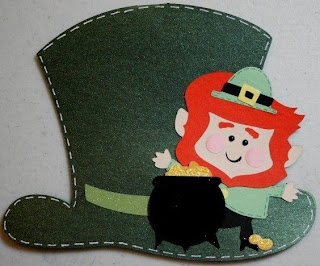 Here is a fun shape card, and I love how it turned out! The card shape, the top hat, is from A Child's Year. I used my Gypsy to weld two 5" top hats together. The cut actually has a shamrock in it, but I hid it using the hide countour feature on the Gypsy. I used a shimmery dark green cardstock for the hat. I then cut the hat band using a light green glitter cardstock. I added some faux stitching around the edge of the hat with a white gel pen. I cut the top hat again at 5" with a plain light green cardstock for the inside. I then used a dark green marker to add some faux stitching on the inside as well. I stamped my sentiment, which is from Studio g, in black ink and then I heat embossed it with a glittery embossing poweder. I added glitter to the word "irish" for some glitz. The leprechaun is from Simply Charmed and I cut him at 3 1/4." I added some glossy accents to his buckle, button and shoes and used some black pearls for his eyes. I also inked his cheeks and added some faux stitching around his jacket and hat. The pot of gold is also from Simply Charmed and cut at 1 3/4." I used some glossy accents on the pot and some yellow Stickles on the gold. I then used pop-dots to adhere the pot of gold to the card. 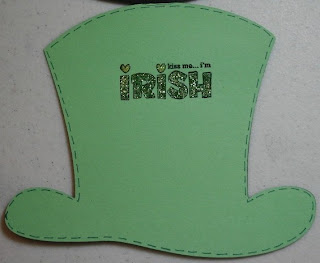 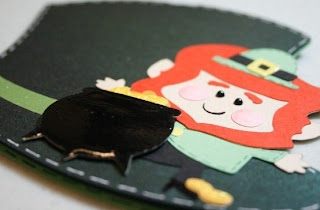