Welcome to the Sensational Scenes Blog Hop!! If you came here from Darlene then you are in the right place. If you just happened across my blog and would like to participate in the blog hop then head on over to Christina's blog to start at the beginning. 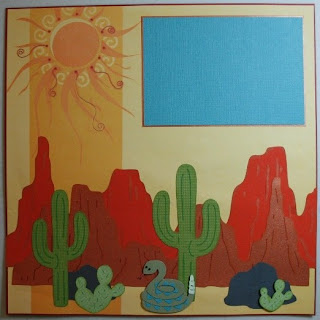 For this blog hop, we were asked to create a scene, something like a beach scene, snow scene, water scene....etc. I decided to create a desert scene. I am working on a scrapbook for a trip I took to Arizona and I thought a desert scene would work perfectly for my scrapbook. I made a 12"x12" scrapbook page. I used a dark red cardstock for the base. I then trimmed the patterned paper 1/4" smaller and adhered it to the dark red cardstock. I created a place for a 4"x6" photo. I used a teal cardstock, cut at 4 1/8"x6 1/8" as my first mat, and a shimmery orange cardstock for my second mat, it was cut 1/8" larger than the teal. I used Paper Doll Dress Up for the desert rocks. I used a dark orange cardstock for one layer and the shimmery orange cardstock for the next layer. I then inked around the edges of the rocks. The cacti are from Old West. I then inked the edges of them and also use a marker to add to the texture of the cacti. The rocks and the snake are also from Old West. I used some black pearls for the snake's eyes. I also used pop-dots to adhere the snake and one of the smaller cacti, for some added dimension. 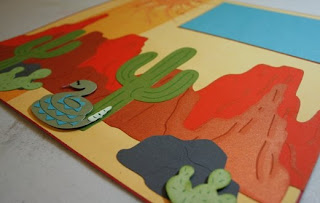 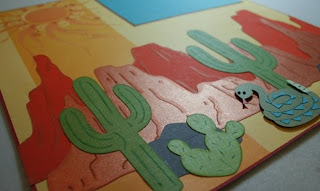 Make sure you check out everyone's blogs on this blog hop, leaving comments, and end at Christina's for your chance to win a set of stamps from Scrappy Moms. The blog hop will run from February 19th-21st and a winner will be picked on the 22nd. I am also offering blog candy on this hop, a set of gem stone flower stamps by Inkadinkado and a pink ink pad by Fiskars. I will also draw a winner on the 22nd. Just be sure to leave a comment and have a US or Canadian shipping address. You do not have to be a follower, although I would love it if you were. 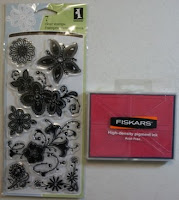